Costume house that has serviced films from Hitchcock to Hammer and Harry Potter to receive honourary BAFTA. 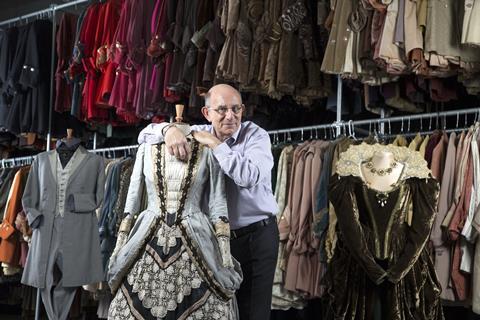 Now in its 175th year, Angels Costumes is the world’s longest-established and largest professional costume house, and has worked with film luminaries including Alfred Hitchcock, Powell and Pressburger, David Lean, Martin Scorsese, and Steven Spielberg on features from the Ealing Comedies, films produced by Gainsborough Studios and Hammer, to the Carry On films, Bond, Star Wars, Pirates of the Caribbean, and Harry Potter.

Dame Pippa Harris, chair of BAFTA’s Film Committee, said: “It’s extraordinary to think that [Angels Costumes] has been in existence longer than BAFTA or indeed cinema itself. It remains at the very heart of our industry, supplying iconic costumes for a remarkable range of films from Doctor Zhivago and Chariots of Fire to Shakespeare in Love and Gladiator, as well as this year’s Cinderella and The Danish Girl.”

Tim Angel, chairman of Angels Costumes, said: “I am delighted that Angels’ contribution to film has been recognised by BAFTA, not just for the Angel family, but also for the incredibly talented people that have worked for the company over the years.

“To have been at the heart of the British and international film industry from the very start is an incredible achievement, and we are all honoured to play a role in its continued growth. As cinema has evolved and changed, so too has Angels, and we are looking forward to seeing what the next hundred years of film will bring!”

With a collection that spans eight miles of hanging rails, and is made up of over 1 million items of clothing, Angels provides costumes for theatre, TV, film, photo shoots, advertisements and music videos.

Established in 1840, Angels is a seventh-generation family business, led by chairman Tim Angel, who has also served as chairman of BAFTA and a governor of the BFI.

This year, Angels supplied costumes to several films nominated at the BAFTAs, including Cinderella, The Danish Girl, Bridge of Spies and The Lady in the Van.