AFM 2019: the buzz titles from Taiwan

Taiwan’s vibrant filmmaking sector is well-represented at AFM with several local hits on offer to international buyers — and a film billed as Asia’s first iPhone feature. 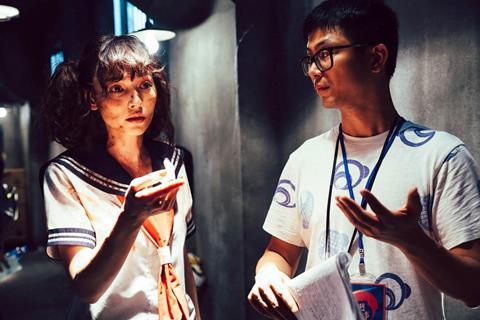 ‘The Gangs, The Oscars, And The Walking Dead’

Dir Lester Shih
Lester Shih’s debut feature is the story of a group of students who dare to test the urban legend that anyone who crosses a ghostly bridge — where a woman once took her own life — at midnight will find evil awaiting them. The cast includes JC Lin (HBO Asia’s The World Between Us) and actresses Vera Yen and Summer Meng. The Bridge Curse is financed by Lots Home Entertainment, which is one of the backers of this year’s highest-grossing local film Detention. Endeavor Content handles world sales, excluding Taiwan where the film will be released in February 2020.
Contact Endeavor Content

The Gangs, The Oscars, And The Walking Dead

Dir Kao Pin-chuan
Dear Ex’s Roy Chiu stars in The Soul Of Bread director Kao Pin-chuan’s second solo film, a dark comedy about two wannabe filmmakers who will stop at nothing to get their first film made — even casting a triad boss’s girlfriend as their leading lady. Yao Yi-ti has picked up a Golden Horse Awards nomination as best supporting actress for her role in the film, which made its world premiere at Busan International Film Festival to sold-out screenings. Backers include Sky Film, mm2 Entertainment and Kaohsiung Film Fund.
Contact Sky Film

Dir Ray Jiang
The third instalment of the popular Gatao (which means ‘gang leaders’ in the Taiwanese Hokkien language) franchise marks the return of actor Rexen Cheng as a notorious gangster, with Nikki Hsieh joining the cast as his love interest. Now in post-production, the gangster drama is the directing debut of Ray Jiang, a step-up from his role as executive director of Gatao 2: Rise Of The King. Executive producer Red Chang’s Chocolate Film created the franchise — the first two films were commercial successes at home when released in 2015 and 2018 respectively.
Contact Emma Chuang, Chocolate Film

Dir Liao Ming-yi
This romantic fantasy is billed as Asia’s first feature film shot entirely on an iPhone. It features Nikki Hsieh (Honey Pupu) and Austin Lin (At Café 6) as a couple suffering from the same obsessive cleaning disorder. It is the inaugural film investment by Activator Marketing, which previously handled the release of box-office hits such as Zone Pro Site and Beyond Beauty: Taiwan From Above, with Singapore’s mm2 Entertainment as co-financier. First-time director Liao Ming-yi, who is also the film’s writer, editor and cinematographer, is an experienced executive director with credits including You Are The Apple Of My Eye. The Taiwan release is scheduled for February 14, 2020.
Contact Sanling Chang, Activator Marketing

Mickey On The Road

Dir Lu Mian-mian
Theatre writer/director Lu Mian-mian’s debut feature is a road movie about sisterhood and the loss of youth, revolving around two Taiwanese girls who travel to Guangzhou, China, in search of a father and a boyfriend. The project received the 2017 excellent screenplay award and funding support from Taiwan’s ministry of culture and Kaohsiung Film Fund, with executive producer Yeh Jufeng and award-winning Small Talk producer Diana Chiawen Lee on board. It is now in post-production and being edited by Lei Chen-ching, winner of last year’s Golden Horse for best editing with Dear Ex.
Contact Diana Chiawen Lee , Friendly Life Film