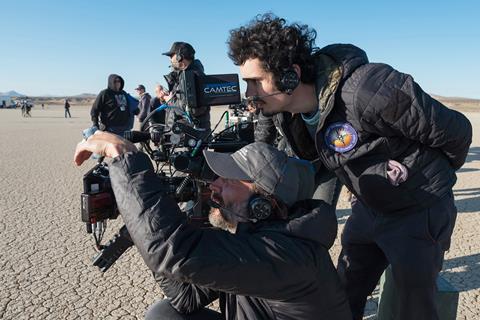 It was in early 2014 when producers Wyck Godfrey and Marty Bowen approached Damien Chazelle to adapt James R Hansen’s 2005 book First Man: The Life Of Neil A Armstrong.

A daunting task for any filmmaker, things began to crystallise when Chazelle enlisted the support of Oscar-winning Spotlight screenwriter Josh Singer. From what he saw on the set of La La Land, for which Chazelle won the best director Oscar, Chazelle felt that Ryan Gosling was the only option to play the pioneering astronaut, and cast Claire Foy, best known for The Crown, as Armstrong’s wife, Janet.

Shot between October 2017 and January 2018, First Man spans the years from 1961 to 1970, a tumultuous era of hope and tragedy in NASA’s lunar programme, which culminated in Armstrong’s historic moonwalk on July 20, 1969. Seeking the right tone for the narrative, Chazelle settled on a thriller format that orbits somewhere between low-gauge film stock and IMAX to convey the flight sequences in a way that evoked the tension of the times.

After Whiplash and La La Land, Chazelle found himself on familiar territory with First Man’s exploration of the high price of lofty ambitions. The key to it all, he discovered, was the grief Armstrong endured following the death of his infant daughter. “That became more and more important,” says Chazelle, “and more the reason to make the movie.”

Screen: What were some of the most challenging technical aspects of First Man?

Chazelle: It was tricky to figure out the methodology of the space sequences. We knew we wanted them to be very visceral, raw, gritty and grimy, like documentary footage, and we wanted to shoot all the interiors of the capsules on Super 16mm [film] to get a feeling of the archival footage that we loved. But we didn’t know how best to go about making these [spacecraft] seem like they were falling through space.

Early on, Linus Sandgren, the DoP, and [production designer] Nathan Crowley proposed the idea of using LED screens for both projection at the windows and outside the crafts. So we could have imagery in-camera that the actors could see, and you could get in-camera reflections and in-camera lighting from that projected imagery.

There was the idea of utilising the soundstage to put full-scale replicas of the crafts up against LED screens, play footage on them, have them on gimbals moving back and forth, and then have a white rig representing the sun moving around the craft at various points when we needed direct sunlight or shadow.

Do you prefer to shoot on film?

Yes, generally. That said, it depends on the story. On [First Man] it was a no-brainer because we wanted to have a very low-gauge film look. I liked the idea of being in keeping with how old school and analogue the crafts were going to be, and how analogue by today’s standards NASA technology was at the time. It’s appropriate that in the film itself you should feel the tactile nature of celluloid.

Yet you shot the moon sequences in IMAX.

It was the contrast we were working towards. Early on we decided we’d have this 16mm-esque look, except for the moon. The moon should provide a Wizard Of Oz opportunity, where you step out of the craft and it’s like stepping out of the house into Oz. Everything changes, everything is surreal and otherworldly, so that’s where the idea of IMAX came from. We [changed the aspect ratio] to hopefully effect an emotional change in the audience that would be some kind of approximation to the feeling an astronaut had stepping out. Talking to some of these people who had walked on the moon, this sense of heightened awareness kept coming up. It felt as though they’d been shot through with adrenaline.

Who did you talk to for your research? 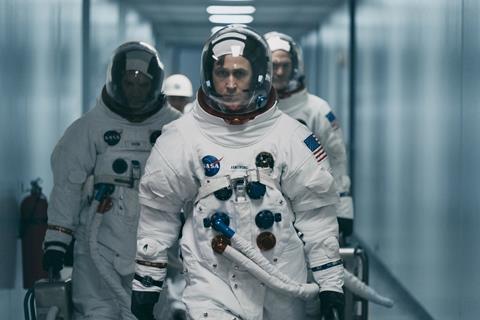 We got to talk to almost everybody seen in the film who is still alive. A lot about what it felt like to walk on the moon I got from Dave Scott, who was Neil’s [Armstrong] co-pilot on Gemini 8 and walked on the moon during Apollo 15. We got to talk to Buzz Aldrin as well, who helped us a lot with getting Apollo 11 right in general.

We were also able to have Al Worden on set, who was command module pilot on Apollo 15, so he circled the moon while the others walked. And Joe Engle is the last living X-15 pilot — that’s the plane you see Neil flying at the beginning of the movie, and he trained Ryan for that scene.

The ambition of NASA in the 1960s is in direct contrast to today’s more conservative climate. Why did you feel it was important to make First Man now?

It was a little bit of happenstance in terms of when it fell into my lap. Coming off Whiplash, to me it initially seemed almost like a similar story, just on a much broader canvas. It dealt with themes that I felt interested in, and I felt there was stuff to excavate; specifically the cost of a goal, of realising a dream, and how painful and arduous and circuitous and bloody that process can be, both physically and emotionally.

The other thing that grabbed me was this idea of grief as a backdrop and even maybe a motivator for the overall mission. I had never known that [Neil] had lost a child right before becoming an astronaut, so I started thinking about [that career] as enacted by a man in grief. It really shifted my perspective on that chapter of history, and made me see Neil in a new light. That story of grief and mourning, of someone struggling to carry on with grief, became more and more important, and more the reason to make the movie, even if it wasn’t initially.

How did you get Ryan Gosling, and which qualities in him do you admire?

When I initially pitched him [the role of] Neil Armstrong, I had never worked with him, so I had no idea if that was going to be a happy experience or an awful experience. I just knew I liked him as an actor. I was really approaching him as a fan, and responding to something in his acting. It was finding a way to make the inscrutable moving; that’s as good a way of saying it as I can think of. He has an ability to say so much with so little and, for that reason, Neil felt like a tailor-made role for him. I never thought of anyone else, it had to be Ryan. So I went to meet him, hoping he’d respond to the idea, and then of course off that meeting we wound up spiralling and talking about musicals and, next thing we knew, we were doing La La Land together. The experience of working with him on La La Land, which was a very different role, only reaffirmed my faith in him for Neil. He’s the type of actor who constantly makes the film around him better. He’s never just thinking of his performance alone, he’s thinking about everything else.

Next up for you is a dive into TV with musical drama The Eddy for Netflix, and an untitled project for Apple. How will you approach those?

It’s another change of pace. I haven’t done long-form television and I’m just doing the first two episodes [of eight]. One similarity [with First Man] would be I’m going to be shooting at least part of it on Super 16 and in a little bit of a semi-documentary style. In some ways it will be a continuation of that [First Man milieu], but the setting is very different from the space race. It’s about musicians so we’re doing all the music live on set, and I’m excited to play around with that. It’s too soon [to discuss the show for Apple]. There’s the loosest ideas we’ve been pinging back and forth, there’s no script yet, and I’m a long way from knowing how I would shoot it.

How has your 2017 best director Oscar win for La La Land changed your career?

It’s tricky to know for sure, partly because it came at the tail end of a long season and, by that point, La La Land had been finished for quite some time and I was in the world of [First Man]. Then the Oscars happened and you wake up from that and — boom — there was a bunch of things that needed immediately addressing on First Man. So I didn’t have that moment of sinking back and thinking, “Oh, does this change X, Y and Z?”, which probably was for the better, because I tend to overthink and second-guess and take the neurotic approach.