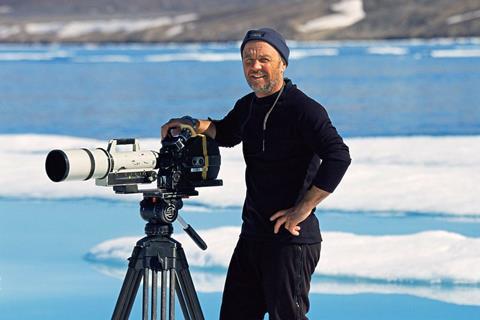 Doug Allan is an Emmy-winning natural history cinematographer and filmmaker, best known for his underwater work and filming in polar regions.

He was principal cameraman on many high-profile productions including Frozen Planet, Ocean Giants, The Blue Planet and Life in the Freezer, all for the BBC.

He will be appearing at this year’s Media Production Show at London Olympia on Tuesday 12 June, for a talk entitled Natural Born Thrillers, in which he will recount some of his most dramatic stories from 35 years of natural history filming and talk about his kit choices.

Screen’s sister publication The Knowledge spoke to Allan to get a taster of the experiences he will be drawing on at the event.

How did you get into the business - were you inspired by anyone in particular?

I was inspired by reading Cousteau’s The Silent World. I was into diving while still at school, then on to a degree in marine biology, a year diving for freshwater pearls in Scotland, underwater expedition work in the Red Sea, then research diver for the British Antarctic Survey, where I discovered the satisfaction of stills photography.

I spent three winters in Antarctica with them, then near the end of one contract (February 1981), a BBC filming crew arrived at our base - David Attenborough, Ned Kelly, Dickie Bird and Hugh Maynard.

They were there for only two days, filming for Living Planet, and it fell to me to help them to the best spots round the island. I was hooked. Camera work seemed to me to embody all that I enjoyed: travel, diving, not an office in sight, excitement, worthwhile, being with great people. And the rest, as they say, is history.

You are well-known for working in extreme locations, from the Antarctic to the deserts of Africa. What are the main challenges in filming in such extremes?

The mental challenge of a tough environment can be wearing - keeping going every day in challenging conditions, especially when the particular animal or behaviour is elusive.

Wildlife filming very often involves discomfort but give me a blizzard over a jungle any day. You can wrap up warm for the former and when it clears you can see for miles. No trees at all for your subject to hide in!

Deserts and being at sea in small boats are probably the harshest environments as far as equipment is concerned. Dust, sand and salt spray are real killers for all things mechanical and electronic.

The Skeleton Coast off Namibia was my worst location. Desert in the day until five in the afternoon when a salt-laden clammy fog rolls in off the sea. You can hear your camera groaning in despair.

Extreme cold requires winterising of the lenses, stripping them down and replacing the normal lubricants with thinner oils and greases, as otherwise focus and zoom can stiffen up and be unworkable. Cables can become very brittle too.

Cameras themselves are all solid-state now - covering them with some kind of insulated, windproof cover and having enough batteries to keep the camera on standby all day – that can be enough to keep you functioning.

What are your most satisfying shots or sequences you have captured on film?

For the first Blue Planet, I filmed a polar bear trying to catch belugas trapped in an ice hole in the Arctic. We heard about it in mid-May and ten days later I was up north on location. That’s classic opportunism - just being ready to react to a rare event.

Tell us about your next project

I’d really like to get a series off the ground about climate change, particularly as it’s affecting the polar regions. Plastics are bad, but if we don’t tackle climate change, so many wildlife and habitat images will only exist in archive.

Technical skill
Cameras and equipment are varied and highly technical, and increasingly so every year. You have to know how and when to best deploy them.

Artistry
Programmes start with fastidious research for the stories, but the first time that big money is spent is when the cameraperson is sent on location.

You don’t get a great movie from mediocre rushes, and those come from high-class operating knowledge (the effects of differential focus and exposure) and (almost) indefinable artistry (framing, composition and lighting).

Tenacity
You need it to make it into the business in the first place, and to stay there in the long term. For wildlife and expeditions, the tenacity to sit out the shit weather, the numbing cold, the leeches and mosquitoes, to really stick at it in pursuit of that one piece of behaviour. You also need tenacity of temperament to take on the nigh-on impossibility at times to have a family life.

Diplomacy
Filmmaking is a team pursuit and everyone is important, from the executive producer and researcher to those you meet for the first time in the field. Sometimes they’re your best chance of success on the current shoot and sometimes they’ll be the ones offering you your next job.

A head for business
You have to have something of a business head on your shoulders. You’re almost certainly going to be freelance or MD of your own (usually one-person) company, with very little in the way of a safety net financially and without the perks of a regularly paid employee, like paid holidays or sick pay. So you have to be savvy with a feel for your way around figures as well as f-stops.

Sense of humour
It always helps. It’s only a film after all.