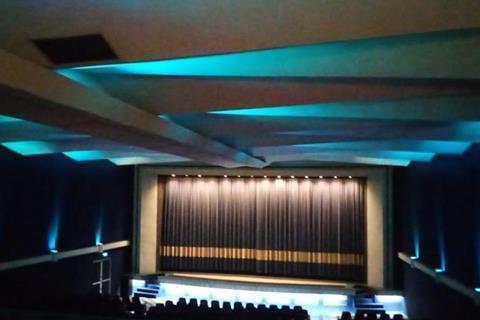 Owners of the first arthouse cinema to reopen in the Central American country of Costa Rica say they have been encouraged by the response from audiences as they head into the second week of business.

Cine Magaly in the capital San José opened its doors on Monday (May 11) with a first-run presentation of The Lighthouse after the ministry of health said patrons could return to theatres that demonstrated sufficient safety and hygiene protocols in light of the ongoing coronavirus pandemic.

Programming director Anabelle Carcheri said the family-run business – sister Jessica is manager of operations, and father Luis runs sister company and distributor Distribuidora Romaly – had already been working on protocols alongside distribution and exhibition association CADEC and got approval in late April.

Costa Rica has kept the impact of the pandemic relatively low compared to other parts of Latin America – at time of writing there were 843 reported cases and eight deaths – yet the Carcheris knew they had to reassure customers it was safe to return.

Ahead of the reopening day, Cine Magaly issued a press release notifying the public that it was about to reopen. “That was important to let people know what we were doing and it is going to help generate audiences for when other theatres reopen,” said Carcheri. “This is the new normal.”

Cine Magaly staff received a day of training to bring them up to speed with new hygiene and safety protocols. These include enhanced cleaning, face shields and gloves for staff, and stickers on the lobby floor to ensure customers remain two metres apart upon entry and line up for concessions in accordance with social distancing measures.

Available seating is indicated by yellow bands, and unavailable seats are marked clearly. Staff check for compliance routinely during shows.

“We don’t want everybody exiting the theatre at the same time so we call people by row to leave separately so people can keep their distance,” explained Carcheri. “That has been quite easy to implement.” As a bonus, returning audience members each received the gift of a flower on the first two days.

The Lighthouse, whose planned March release had to be scrapped when Cine Magaly and every other theatre closed, is currently playing once a day at 4pm on the larger of the venue’s two screens, a 557-seat auditorium.

Monday’s screening sold out all 99 seats, which due to social distancing restrictions represented 17.8% capacity. 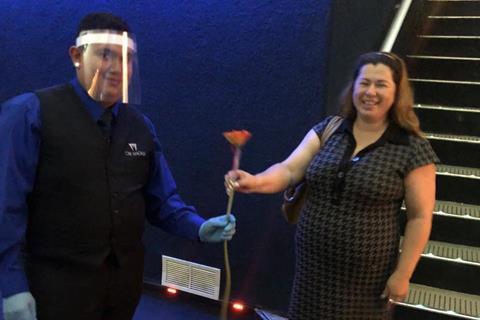 On successive days Eggers’s black-and-white Cannes 2019 selection drew 55 people on Tuesday, 39 on Wednesday, 52 on Thursday, and 88 on Friday.

The daily presentation enables patrons to return home before the 7pm curfew. Carcheri said the curfew is about to get rolled back to 10pm, and once that happens Cine Magaly will expand to two presentations a day, 4pm and 7pm, starting on Monday May 18.

“We feel very encouraged because it’s been a start,” Carcheri told Screendaily. “There have been many questions: do people trust the theatre, do people want to leave their homes, can people leave work to get to the show, can they get home before the curfew? And did they like the film?”

Monday’s show was for “single” customers only, however on the same day the ministry of health said it would allow “bubbles” of people to sit together. Cine Magaly reconfigured seating to accommodate bubbles starting on Tuesday, when it made 140 seats available in the larger auditorium.

Carcheri said they have been cautious not to open too fast while operating within the 25% maximum occupancy stipulated by the Costa Rican government. “It’s been very contained and careful. We didn’t really want a big opening with thousands of people flocking to the theatre. We wanted to test it and see if there were any adjustments we needed to make.” 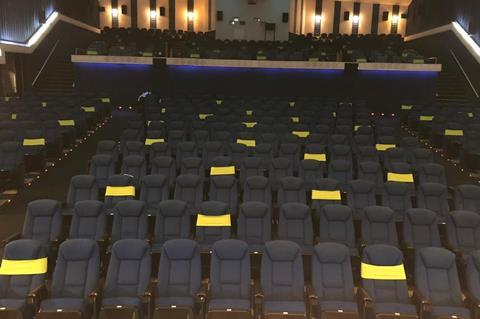 Weekends are currently off-limits at Cine Magaly, however Carcheri is working with CADEC and in talks with the authorities to move up the June 21 start date.

The major exhibitors are eyeing a reopening some time in June in Costa Rica.

By that time Cine Magaly will have been open for six weeks. Carcheri said the goal is to build on a solid foundation of mutual respect with patrons.

“Our audiences are faithful to our theatre and trusted us to come to our site at a time like this.”