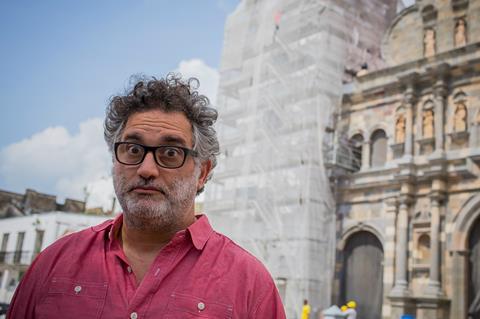 As Benaim follows Blades, his friend and celebrated salsa singer, Harvard law graduate, actor, and former Panamanian minister of tourism, the Latino superstar meditates on his musical career and considers his next stage as he walks the streets of New York and encounters people whose lives have been changed by his music and lyrics.

Ruben Blades Is Not My Name is a Panama-Argentina-Colombia co-production, funded by

The film will open in Panama, Central America and the Caribbean through Prolatsa, and in Colombia via Caracol TV.

What does Ruben Blades mean to Panama?
Growing up here there are three names everybody knows: Roberto Duran, Ruben Blades, and Noriega. Those are the big names I’m asked about whenever I get in a taxi anywhere in the world and say I’m from Panama. For Latin America, never mind just Panama, he is one of the singer-songwriters – the equivalent of a Bob Dylan or John Lennon or Paul McCartney, because he’s been at it for about 50 years and his lyrics have seeped into the collective consciousness of everyone from my grandparents’ generation through to our children’s generation.

People know his songs by heart. He’s like a popular philosopher these days. His lyrics have seeped into people’s minds: they’re very smart and political. It’s like what happens with Bob Marley: they feel timeless. When you listen to something of his, it might have been recorded in the 1970s but it feels as relevant today as it ever was, musically and content-wise.

How did you meet Blades?
I was a fan before I knew him, growing up here. I got to meet him when I made my first feature film [Chance]. I wanted to show it to him because he was the minister of tourism [at that time] and was also an actor. There wasn’t much of a film culture in Panama… my first film was the comedy Chance and it was the first Panamanian film to be distributed in Panamanian theatres in decades. For me it was a big deal, so I showed it to him and he started telling me stories about his past. Right away I felt the angst of not having my camera with me. Filmmakers detect that. I wanted to record it.

This kept happening over and over. We would see each other somewhere and he would start to play me the recordings he made with Lou Reed. He was casual about all this but for me it was gold dust. Héctor Lavoe, Willie Colón… everyone you could think of, he had sung with. He coached Michael Jackson for three days for the only song [Jackson] ever sung in Spanish, but he didn’t take any photos. Paul Simon invited him over to his house to listen to an album he’d just made called Graceland. He’d tell me all these stories and sing his songs acapella.

What was the filming process like?
It was very sparse. A week here, two days there, in between tours. One of the things I like personally is after I shot the whole film I still feel curious about him: there’s still mystery as an artist and a person. It feels good that I’m still intrigued by him. You cannot know everything about him. The film is an impression, a moment in time, and he’s already moved on from that moment. I’m happy. He always thinks about the next thing.

He seems so personable and truly a man of the people when he walks through the streets of new York
His approach to fame is very interesting. He has to deal with being a very big star, but he’s also very private. Seeing that up close taught me he can be very personal even though he’s very public. He loves to walk in New York and he has these meaningful encounters. One time a UPS driver asked for a hug and said [Blades’] songs helped him through some very tough times. Ruben gave him a hug. You realise what happens after he writes his songs and how it comes back to him.

Watching the film, Blades seems a little sad perhaps, searching for something to fill an emptiness
I know I am. We all have a void we’re trying to fill. Some people show it more. That’s something that resonates with me in my own personal search: connecting with that void, or as I like to say, the hungry ghost that pulls you to the dark side. That connection with someone about the meaning of life… When I can make that connection it’s very special to me. I tried to go there with him in the film, but not in a superficial way. It’s a film and it’s superficial in the end because you cannot go too deep in one and a half hours.

Did the archive footage come from Blades?
No. That’s interesting about him: he doesn’t keep that much. He gives a lot of it to the Harvard archives. He’s always moving on. He has stuff in storage here and there, but not all of it. I love that about him. Tracking down footage was something new to me. It was an interesting part of putting it together, and dealing with the rights.

What’s your take on the types of stories we’re seeing from Panama’s filmmakers?
Because there were no films [for a long time – Benaim does not offer a reason for this], there’s a silence to fill with the most urgent topics that haven’t been dealt with. What might seem clichéd in other cultures is being dealt with [in film] here for the first time. A film about Ruben Blades should have been made years ago, but it wasn’t. My [2014] film Invasion did really well here and says a lot about Panamanians’ desire to know more about their identity. I’ll never forget when a 14-year-old girl at a Q&A stood up and said the film made her angry and she couldn’t believe that at her age she had never learned about the invasion [by US forces in 1989] from her parents or at school. There’s a need for film to express our very recent history because it’s such a young country.

And what’s the state of the local industry in general?
The industry here is growing fast. We need to give it a little more time to become an industry. It still feels a little like it’s [made up of] independent efforts, but it’s growing. Institution-wise it’s much better than when I started. Now there’s a film fund, a law, a festival, workshops, and production every year. There’s a lot of talent here. The need to tell stories about our society hasn’t allowed that many people to go into personal stories that can be told anywhere and that’s when it’s going to get interesting. That’s where I’m going now with my next film. If you watch an American film, the culture is always there, whether it’s comedy or drama. We need to go there to allow that very specific cinema and my view is it hasn’t happened too much.

So what are you doing next?
I try to do something that makes sense. Life is short and there’s a limited amount we can do. The next one is a drama we will shoot here called Plaza Catedral. It’s about a 40-year-old man who loses his son and gets divorced and meets a kid from the streets by chance. It’s a very personal drama that I’m planning to shoot in October. It will be a co-production with Mexico. It’s currently going through the Jerusalem Lab and has the support of Dicine and Ibermedia.

Where are you at in your own career?
I know I’m not new to filmmaking because I’ve done a few [his first film, the comedy Chance, opened in 2010 and grossed more in Panama than Avatar.]  but I feel I’m at a very early stage in my career. I feel I have done nothing, yet I have done enough to say I’m someone who’s done stuff. But there’s a lot more [to come]. I feel I’m 15% of the way through my career.