Screen’s expert critics have selected their top five films of the year, plus a best documentary and a hidden gem. 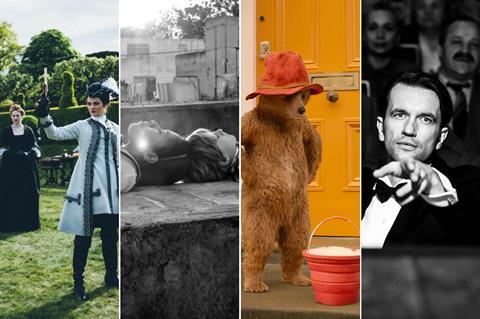 It’s difficult to choose between this and ROMA. In the end, it was the chemistry between the quick-witted talents that won out. The fearsomely sharp script, performances, humour, pathos, production values — all with a dark Yorgos Lanthimos top spin that’s fast enough to make you forget you’ve ever seen a period piece before. Well, you haven’t seen one like this.

A film full of mysteries, Lee Chang-dong’s drama explores all that’s unknowable: the riddle of attraction, other people’s secrets and our own inexplicable behaviour. Burning is a love story, a thriller, a societal critique and, ultimately, a tragedy, but it’s guided by its three remarkable central performances.

Working in his native land seems to bring out the best in Pawel Pawlikowski. His follow-up to Ida is a stunning marriage of ravishing imagery and heartfelt emotion. A passionate romance is at the mercy of post-war politics in a film that feels like a cherished album of family photos. Precise, flinty and beguiling.

There’s nobody quite in the same league as Alfonso Cuarón right now. And ROMA is arguably his masterpiece. The staggeringly ambitious period street scenes are reminiscent of Mikhail Kalatozov’s Soy Cuba; the textured sound design put me right there in the film. And that devastating hospital sequence left me in pieces.

A worthy Palme d’Or winner, Japanese director Hirokazu Kore-eda’s study of an alternative family begins in sweet Frank Capra territory but ends up forcing its audience to confront the kind of emotional fractures that can ruin lives. A brilliant ensemble cast carries a story that probes social ethics and illusions of intimacy.

When the mere title of a film is enough to release endorphins, all concerned must be doing something right. Paddington is sent to jail for a crime he did not commit, making the ‘wronged bear’ and ‘bear in prison’ genres entirely his own. His innate moral code is exemplary. In these increasingly intolerant times, it’s worth remembering that Paddington is an immigrant. One who makes his surroundings considerably better. There are worse philosophies than, “Please look after this bear.” And Hugh Grant is irreplaceable.

A perplexing whirlwind of a film and a tour de force of stylistic audacity. Son Of Saul director Laszlo Nemes immerses us in a detective story set in 1910s Budapest, laying a veneer of elegant costume drama over a descent into the abyss of modern history, all filtered through the magnetising stare of its lead Juli Jakab.

As an aching romance about star-crossed lovers (Tomasz Kot and Joanna Kulig), Cold War devastates. As a portrait of resigned acceptance — of a broken world, lives and hearts — it cuts as starkly as its luminous black-and-white imagery. Set in post-war Poland, Pawel Pawlikowski’s film is intimate, passionate and piercing, and swells as entrancingly as its soundtrack.