Six talking points ahead of the 2018 Baftas 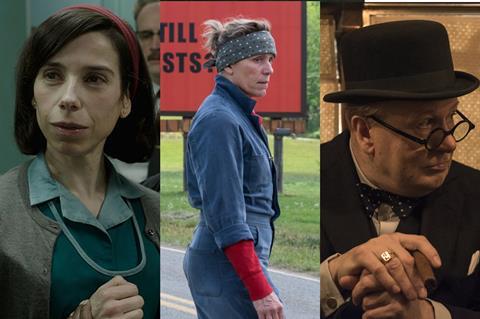 Will The Shape Of Water sweep the board?

Guillermo del Toro’s The Shape Of Water scored 12 nominations and is the most nominated film at the Baftas since The King’s Speech achieved 14 nods in 2011.

Darkest Hour had only managed a single Golden Globe nomination but the combination of its stirring theme and Gary Oldman’s bravura performance proved a hit with voters within the British academy. Meanwhile, Blade Runner 2049, shutout by the Golden Globes, was in danger of becoming an awards afterthought but the sci-fi has now scored as many Bafta nominations as Ridley Scott’s 1982 original.

Three Billboards Outside Ebbing, Missouri, which garnered nine nominations, is continuing to build a head of steam after its four Golden Globe wins. The film is now clear favourite with the bookmakers for best picture at the Baftas.

A big night for the Brits

The biggest takeaway from the Bafta nominations is their Britishness, which ironically is not always a quality associated with the awards. While most national film ceremonies fete their own – think Oscars, Cesars, Goyas, David Di Donatellos etc – Bafta has been inclined to foreground US films.

2018 bucks that trend. Iconic British characters and historical events have struck a chord with voters who have delivered the most British line-up in decades.

Three films with significant UK elements were nominated for best film: Dunkirk, Darkest Hour and Three Billboards Outside Ebbing, Missouri. That ratio in the main category has not been bettered since the 1980s. Between them the three films scored 26 nominations.

Eight of the 20 acting nominees are British, including four of the five best actor nominees, and the outstanding British film category is less US studio-oriented than it has been in previous years [Dunkirk met the eligibility criteria for the category but the filmmakers decided not to enter it for the award].

While the Baftas continue to be dominated by US product on the whole, Bafta CEO Amanda Berry agreed that this year had a distinctly British flavour. The executive told Screen that the organisation received more British film entries year-on-year and she also highlighted the introduction of the tax credit in 2005 as now playing an important role in firming up the British industry.

In addition to the local tinge of the nominees, national treasure Joanna Lumley – star of hit BBC series Absolutely Fabulous – was announced as new host of the awards following the exit of Stephen Fry after 12 years.

In an overdue move, Lumley becomes the first woman to host the awards alone. Mariella Frostrop co-hosted the awards in 2001 and Princess Anne and Vivien Leigh hosted/presented the awards in the 1980s and 1950s, respectively. But both Leigh and the Princess were joined in their duties by other Bafta dignitaries.

This year’s nominations are also low on diversity. Female directors are omitted from the best director category for a fifth year in a row and only two of 14 nominated writers are women. In the main acting categories, only two of the 20 nominated actors are not white while ethnic diversity in the craft categories remains a rarity.

Some commentators were irked that Lady Bird director Greta Gerwig was overlooked in the best director category. Gerwig and the film were nominated for best director and best film for the Oscars.

Pentagon Papers drama The Post was entirely shut out, an unusual scenario for a Steven Spielberg film, especially given its powerhouse cast which included Meryl Streep and Tom Hanks. Streep has a record 15 Bafta acting nominations, while Spielberg personally boasts 13 nominations across eight different films. Some Bafta voters have suggested that the film might have suffered from DVD screeners not arriving until late in the day but the film may have also struggled due to its proximity to well-received newspaper drama Spotlight, which was an awards favourite two years ago.

Downsizing is Alexander Payne’s first film since 1999 comedy Election not to get a Bafta nomination while Netflix’s Mudbound was also a shutout. Netflix did score nominations for three movies: Kingdom Of Us, First They Killed My Father and Icarus, but there was nothing for an Amazon production. Hostiles and The Greatest Showman were other shutouts.

Meanwhile, eyebrows have been raised after lauded UK drama God’s Own Country, which won four BIFAs, missed out on a nomination for outstanding debut by a British writer, director or producer.

Guests are expected wear black this year, as they did at the Golden Globes, to make a statement against sexual harassment in the entertainment industry. The news first emerged when a letter urging attendees to wear black sent “on behalf of a collective of UK based female film and television industry leaders” was seen by the press. Like the Golden Globes, where the standout moment was a stirring speech by Oprah Winfrey, expect the Baftas to be political this year.