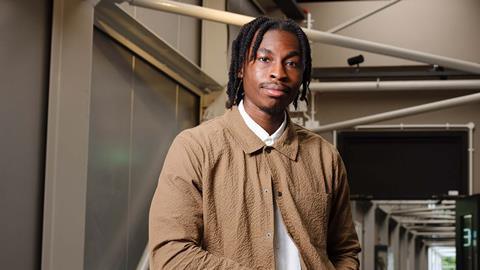 Following his three acclaimed shorts — including back-to back Bifa nominations for Mandem (2020) and Precious Hair & Beauty (2021) — John Ogunmuyiwa is set to take the next big step in his career, directing the first three episodes of eight-part Champion, for BBC and a streamer partner.

Created by Candice Carty-Williams, author of bestseller Queenie, the series follows a rapper who returns home from prison to discover there is now a new music star in the family — his sister.

“That’s an interesting process in itself, jumping onto someone else’s work,” says Ogunmuyiwa.

The focus on Champion means a short break from the writer/director’s multiple own projects, which include magic-realist-flavoured Film4 feature Boogie In The Jungle, centred on two sisters over one day at Notting Hill carnival; Ale Trail, a series for UK production company DNA; an untitled feature (“It might be called Grounded”) for Searchlight Pictures, about a week in the life of a West African immigrant in London; and TV series South London I Love You, co-created with friends Abraham Adeyemi (Tribeca-winning short No More Wings) and music video director Femi Oladigbolu, in development with Tessa Ross’ House.

Growing up in Croydon, south London as the family’s in-house photographer, Ogunmuyiwa went on to study creative advertising at Buckinghamshire New University, and then worked at creative agencies. But his ambitions to tell stories saw him apply for short-film funds and schemes, and in 2021 he was invited to shadow on Netflix series Top Boy.

Growing up reading comic books and anime, Ogunmuyiwa recalls watching Fernando Meirelles’ City Of God as a moment that “made me re-evaluate stuff — the tonal shifts in it are so crazy, because it’s funny, but it’s so dark, it’s so real, but also kind of magical”. Those tones are all present in the filmmaker’s own work, which he characterises as unified by “observation and magic and questions — I like heists, I like action, I like romance, and then I want to do something magical”.

Inspired by filmmakers including Christopher Nolan, Alfonso Cuaron and Alejandro Gonzalez Inarritu who “make their big films not feel generic”, Ogunmuyiwa adds: “My dream is to try and do Bond, but my way.”

Now the 28-year-old is just revelling in all the storytelling opportunities that are coming his way. “I am living the dream. I can’t even complain. I’d do stuff for free,” he says. Just don’t tell his agent.