The 24 hottest projects at this year's Hong Kong Filmart

There is a thrilling selection of Chinese-language titles at Filmart this year. Liz Shackleton picks out some of the most promising. 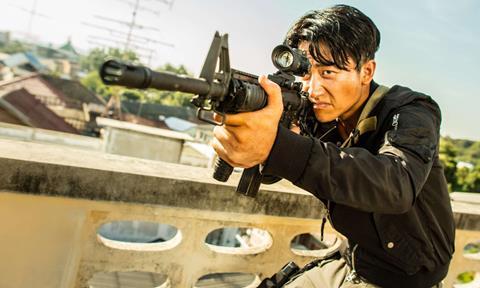 With very few Hong Kong or mainland Chinese sellers making the journey to this year’s European Film Market in Berlin, Filmart offers a chance for buyers to catch up with the Chinese-language titles that will be rolled out in the region for the rest of the year.

After serving up the biggest film of the Chinese New Year holiday — Kung Fu Yoga, starring Jackie Chan and directed by Stanley Tong — China’s Sparkle Roll Media has launched a Hong Kong-based sales arm that is selling Ding Sheng’s reboot of the A Better Tomorrow series.

At the lower end of the budget spectrum, Hong Kong filmmakers are also turning out local stories such as Chapman To’s The Empty Hands and Andrew Wong’s With Prisoners, along with quirky horrors such as Pak Wing Yan’s Vampire Cleanup Department, which is already shaping up as a fantasy film festival hit.

With growth at the China box office flatlining last year, local producers will hope at least some of these titles keep up the momentum of the Chinese New Year holiday period. Kung Fu Yoga emerged as the top-grossing release of the holiday with $250m, followed by Journey To The West: The Demons Strike Back with $236m. These titles are now the third and fifth highest-grossing Chinese films of all time.

The follow-up to Leste Chen’s 2014 psychological thriller The Great Hypnotist tells the story of a famous novelist who recovers from a nasty divorce by having a decade of his memory wiped. But when he tries to recover the lost memories, he finds himself in the mind of a serial killer. Huang Bo, Xu Jinglei and Yang Zishan head the cast of the $22m film, which is scheduled for release on April 28.

The Huayi Brothers production follows a hard-bitten attorney who is mistakenly sent back to Earth when she dies in a car accident, and is horrified by her new life as a housewife with a strange husband and two kids. Also starring Wang Jingchun and Ouyang Nana, the film is in post-production for release in early summer 2017.

Jackie Chan’s long-time collaborator Ding Sheng is rebooting John Woo’s classic A Better Tomorrow series with this ‘heroic bloodshed’ action title, which is in pre-production. Starring Wang Kai (Railroad Tigers), Ray Ma (Ice Fantasy) and Talu Wang (Railroad Tigers, Our Times), the film follows the conflict between two brothers — one heading a smuggling operation and the other an up-and-coming star in the police department’s narcotics division.

Following his directorial debut Let’s Eat, actor Chapman To has directed this drama about the daughter of a karate coach whose only wish is to sell her late father’s dozo. But when the day arrives, she finds that 51% of the business was left to one of her father’s worst pupils. Currently in post-production, the film stars To, Stephy Tang, Yasuaki Kurata and Stephen Au.

Produced by Huayi Brothers, this crime drama stars Duan Yihong (The Dead End) as a technician who is left as the sole survivor of an explosion in a mine shaft. When he begins to investigate the incident, some of his fellow miners are murdered and he is framed as the prime suspect. Wang Jingchun (Time Raiders) and Yu Nan (The Expendables 2) also star in Explosion, which is in post-production for release in the summer of 2017.

Huang Xuan (Blind Massage), Duan Yihong and Lang Yueting (Mountain Cry) star in this crime action title from the team behind the Infernal Affairs and Overheard series. Scripted by Felix Chong, Extraordinary Mission follows a police officer who goes undercover in a drugs cartel and discovers his boss’s colleague has been held captive by the gang for 10 years. In post-production, the film is co-directed by Alan Mak and acclaimed DoP Anthony Pun.

Scheduled for release in July, Yuan Weidong’s comedy revolves around a businessman who fakes his own father’s death in order to collect condolence money and repay his debt to gangsters. When the plan goes wrong, his father travels to Macau to rescue him. Da Peng (Pancake Man) and Fan Wei (I Am Not Madame Bovary) head the cast of the Wanda Pictures production. Yuan previously directed In The Blue (2006) and Out Of Control (2008), and was also assistant director on The Taking Of Tiger Mountain.

Starring Zheng Kai and Zhang Yuqi, Wong Jing’s action adventure tells the story of a monk who realises he is the reincarnation of a fairy spirit that was cast down from heaven and seeks out his true fairy love. Now in post-production, the film is produced by Beijing Hairun Pictures and Mega-Vision Project Workshop. Zheng’s credits include Personal Tailor, Running Man and Zhang Yimou’s The Great Wall.

Fresh from its world premiere at Berlin, where it received rave reviews and strong buyer interest, Liu Jian’s animated feature is a black comedy about a chauffeur who steals $1m from his boss to fix his girlfriend’s failed plastic surgery, setting off a farcical chain of events. Produced by Yang Cheng’s NeZha Bros Pictures and Le-joy Animation Studio, the film is Liu’s second feature following Piercing I (2010), which screened at Annecy and won the best animated feature prize at the Asia Pacific Screen Awards.

Bill Kong produces this action title about a criminal psychologist tracking down a serial killer who targets people who have been acquitted of notable crimes and uses their guilt as his modus operandi.

The cast is headed by Deng Chao (The Mermaid), Taiwanese actor Ethan Ruan (The Assassin) and Hong Kong actress Karena Lam (Zinnia Flower). Currently in post-production for release in the second half of 2017, the film marks the feature debut of Xu Jizhou, who has directed several hit Chinese TV series.

Love Off The Cuff

Miriam Yeung and Shawn Yue resume their roles as star-crossed lovers Cherie and Jimmy in Pang Ho-Cheung’s follow-up to romantic comedy hits Love In A Puff and Love In The Buff. In this third instalment, set in Hong Kong and Taipei, the couple’s relationship is tested when Jimmy’s childhood friend asks him to donate sperm for her artificial insemination. The film is scheduled for release in late April.

Chinese actor Zhang Hanyu and Japan’s Masaharu Fukuyama star in John Woo’s $50m action thriller Manhunt, which is in post-production after shooting in Japan. Produced by Chan Hing Kai and Gordon Chan, the film is based on a novel by Juko Nishimura about a lawyer who is framed for murder and sets out on a mission to clear his name. The book was first adapted into a popular 1976 Japanese film starring Ken Takakura.

Benny Chan’s fantasy drama imagines a world where cats are an alien intelligence that secretly rule the world, as both free-spirited mafia dons or seemingly harmless household pets. Louis Koo and Ma Li head the human cast of the film, which is being lined up for a tentative summer release. Chan Hing Kai, who recently produced Weeds On Fire, is on board as a script consultant.

The directing debut of acclaimed DoP Jason Kwan, this surreal romantic comedy tells the story of a Chinese-American surfer in Hawaii who meets a woman claiming to be a ‘nail clipper monster’ — a special sub-type of human that eats only nail clippers. Produced by Pang Ho-Cheung and starring Chang Hsiao-Chuan and Zhou Dongyu, the film is scheduled for Hong Kong release on April 14.

Our Time Will Come

Following her critically acclaimed biopicThe Golden Era, Ann Hui is tackling another historical drama, this time following a group of plucky youths fighting for freedom during the Japanese occupation of Hong Kong. Eddie Peng and Zhou Xun head the cast of the film, which Bona Film Group is lining up for tentative release in July.

Produced by Jackie Chan and directed by Korean filmmaker Chang, this sci-fi action adventure follows a female scientist who travels back in time to rescue her kidnapped son. Yang Mi (You Are My Sunshine) heads a cast that also includes Wallace Huo (The Honey Enemy), Taiwanese veteran King Shih-chieh(Brotherhood Of Blades) and newcomer Liu Chang. The film is in the final stages of post-production for tentative release in July.

Andy Lau is producing and stars in this $22m crime thriller about a cop up against a mob boss who is planning a bomb attack in the busiest cross-harbour tunnel in Hong Kong. The cast also includes Jiang Wu (A Touch Of Sin) and Philip Keung (Firestorm). Herman Yau (Ip Man: The Final Fight) is directing, while Dion Lam (Kung Fu Jungle) is on board as action choreographer.

Universe Entertainment and Bona Film Group are co-financing the film, which is in post-production for tentative release in April.

This Is Not What I Expected

Takeshi Kaneshiro and Zhou Dongyu head the cast of this $18m romantic drama about a talented chef at a Shanghai hotel who becomes involved with a guest, unaware that he is a ruthless acquisitions executive whose actions will end her employment. Currently in post-production, the film is produced by Peter Ho-sun Chan, who most recently directed Dearest and produced Derek Tsang’s sleeper hit Soul Mate. Derek Hui, an acclaimed editor with credits including Skiptrace and Soul Mate, makes his directorial debut with the film.

Writer Pak Wing Yan (Full Strike, I Love Hong Kong 2013) is making his directing debut with this reboot of Hong Kong’s comedy-horror vampire genre. Babyjohn Choi (The Way We Dance), Siu Ho Chin (Rigor Mortis) and Min Chen Lin head the cast of the film about a well-meaning vampire hunter who infuriates his boss by falling for a female vampire.

Andrew Wong Kwok Kuen, assistant director on Wilson Yip’s Flash Point, makes his directing debut with this gritty drama based on a true story of a young gang leader trying to survive in a detention centre for juvenile offenders. Starring actor-singer Kelvin Kwan (Lan Kwai Fong 2) and Neo Yau Hawk-Sau (She Remembers, He Forgets), the film is scheduled for release on April 20.

Clement Cheng, co-director of 2010 hit Gallants, is producing this adaptation of a popular Hong Kong novel about a zombie outbreak during a water shortage in Hong Kong. Wai Lun Lo is making his feature debut on the action thriller, while rising stars Michael Ning (Port Of Call), Louis Cheung (Keeper Of Darkness) and Cherry Ngan (The Way We Dance) head the cast.