The Brit List, the annual collection of unproduced UK screenplays, has unveiled its 2018 line up. 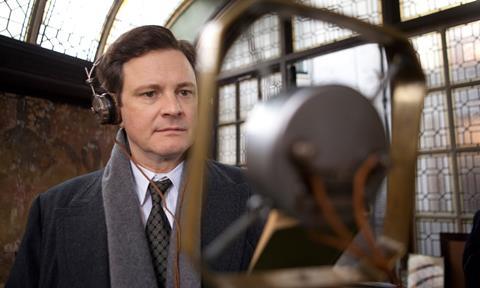 ‘The Kings Speech’ was on the inaugural Brit List in 2008.

Now in its 10th year, the list highlights film projects voted for by an anonymous group of film industry professionals from more than 90 companies, including agents, financiers, producers and distributors.

This year there are 18 projects on the list. Topping them is Phillip Morgan’s Benny In The Dark, a supernatural thriller set in the 1950s, which received a total of nine recommendations. The film is set up at Tessa Ross and Juliette Howell’s House Productions.

Second on the list with eight recommendations is Surge by writers Rupert Jones and Rita Kalnejais. Set over 24 hours, the thriller follows a man on a journey of self-liberation. It is in development with Rooks Nest, BBC Films and Creative England.

Third with six recommendations is romantic comedy Yesterday Tomorrow Today by writer Lawrie Doran, with revisions by Polly Vernon. Met Film Production is working on the project, which tells the story of a bored 30-something who finds a portal to the past where she embarks on an exciting affair with a younger man – her husband before they met.

On the further list were projects set up at production companies including Ecosse Films, Blueprint and Stigma Films.

In the past 10 years, the Brit List has seen 70 of its selected screenplays progress to production, a hit rate of one in four. Those projects have gone on to receive six Oscar and nine Bafta recommendations, and gross $1.7bn worldwide. They include The King’s Speech, which appeared on the inaugural list, Lion, Paddington and recently Operation Finale and The Favourite.

The Brit List was founded by Alexandra Arlango who still runs the initiative. In February this year it launched a TV offshoot.

Benny In The Dark by Phillip Morgan (Independent Talent Group)

Summary: Set over 24 hours in London, SURGE is a stripped back thriller about a man who goes on a bold and reckless journey of self-liberation in London.

Summary: Feeling pressure to start a family she’s not sure she wants, a bored thirty something finds a portal to the past where she embarks on an exciting affair with a younger man – her husband before they met.

Summary: Determined to avenge the killing of his flock, a Cumbrian shepherd is drawn into cycle of violence that exposes secrets from his past.

Summary: A Romanian delivery rider’s moped is the centre of his family’s new life in London. When it is stolen, how far will he go to get it back?

Summary: The extraordinary story of Anna Nathan who became pregnant during the holocaust and, facing certain death if discovered, resolved to conceal her pregnancy inside the camps.

Summary: Adaptation of Elizabeth Fremantle’s novel about Katherine Parr, the one wife to survive Henry VIII.

Summary: In the final fortnight of Marilyn Monroe’s life, when she cannot find her therapist, she instead befriends her taxi driver.

A Pail Of Air by Alistair McDowall (Judy Daish Associates)

Summary: A family survives a devastating ice age and find out they are not alone. Adapted from the short story of the same name by Fritz Leiber.

GB by Philip Robinson (The Agency)

Summary: A white van man and his best friend since childhood, who is also a trans woman, take a road trip to make the money for her reassignment surgery – one last trip as mates before they’re man and wife.

Summary: Pete’s turning thirty and the old gang from uni are throwing a party. But his head begins to spin as one by one his friends slowly turn against him. He can’t work out: did he do something wrong? Is he paranoid? Or are his friends the sick ones?

Summary: In near-future San Francisco, a successful therapist is struggling to raise her child after her husband’s death. She is intrigued by an offer to treat the world’s first artificial consciousness, but is surprised to discover that it wants to die.

Summary: Adaptation of George Orwell’s first novel based on his experiences as a policeman in Burma, it presents a devastating picture of British colonial rule.

The Power by Corinna Faith (Casarotto)

Summary: 1973: a young nurse is forced to work the night shift in a crumbling hospital as striking miners switch off the power across Britain. But inside the walls lurks a terrifying presence that threatens to consume her and everyone around her.

Summary: Based on the novel by James Lasdun. A New York professor of gender studies becomes increasingly unhinged when he suspects that his mysteriously AWOL predecessor - who epitomised the toxic masculinity he rails against - is framing him for the brutal murders of women in the city.

Summary: The Housekeeper is a beautiful and tragic love story between two women set in 1930’s England and the fictional origins story of the Daphne du Maurier novel, Rebecca, and du Maurier’s creation of the infamous character of Mrs Danvers.

Summary: A female psychiatrist develops a condition that makes her unable to distinguish people’s faces, including the face of her stalker.

She Will by Kitty Percy (The Agency)

Summary: After a double mastectomy, fading star Veronica Ghent goes to a healing retreat in rural Scotland with her young nurse, Desi. The two develop an unlikely bond after mysterious forces give Veronica the power to enact revenges in her dreams.