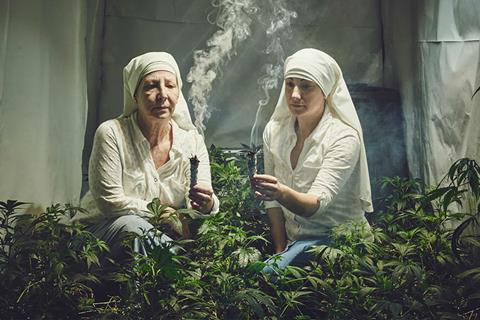 Breaking Habits, the cannabis documentary from Robert Ryan, has secured US distribution through recently launched genre label Cranked Up.

The label struck the deal with Film Constellation at the Marché in Cannes. The film screened privately for buyers on the Croisette, and is scheduled for a festival premiere in the autumn.

It is produced by Nick Taussig and Paul Van Carter of Salon Pictures, with Ian Berg and Christopher J. Reynolds as executive producers.

Written and directed by Ryan, the film follows former corporate executive Christine Meeusen who changed paths to become a cannabis farmer for medical marijuana. After fleeing a bigamist husband and adopting the persona of a nun called Sister Kate, she created Sisters of the Valley, a California-based business for medical cannabis products.

Cranked Up was launched by Good Deed Entertainment (GDE) at the start of this month. GDE’s CEO & founder Scott Donley said, ”The timeliness of this project, along with the poignant and inspiring story of Sister Kate made this a film we could not pass up.”

Film Constellation’s slate also includes spy thriller Spider In The Web with Ben Kingsley and Monica Bellucci; Eye For An Eye from [REC] director Paco Plaza and period romance Tell It To The Bees starring Holliday Grainer and Anna Paquin.