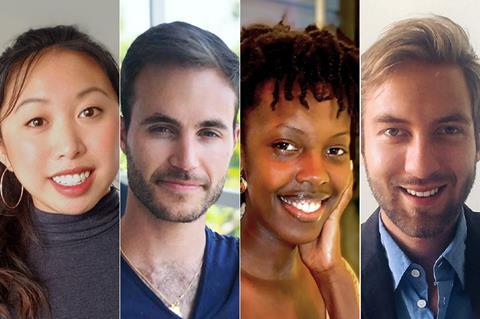 Film Constellation has promoted four staff to executive level, in a change to the leadership structure at the UK-based production, finance and sales firm.

Chloe Tai becomes director of marketing, general manager, with broadened management responsibilities and a focus on team leadership and corporate impact work. Based in London, Tai will report directly to Film Constellation founder and CEO Fabien Westerhoff, who is based in Amsterdam.

Tai joined Film Constellation in 2017 following a career in marketing at L’Oreal, and has since worked on international distribution campaigns for films including Been So Long starring Michaela Coel and Natalie Erika James’ horror Relic. She has recently led marketing efforts to orchestrate the company’s global digital market premieres.

Edward Parodi is promoted to director of acquisitions, having joined the company at its inception in 2016, and overseen international sales for the first three years. Working out of London, dual French-UK national Parodi will lead the company’s acquisitions strategy with a particular focus on international co-production opportunities. He previously trained at HanWay Films, having gained experience in development at UK production companies DNA, Heyday Films and Wildgaze Films.

Also based in London, Anisha Kasozi is promoted to the newly-created role of business and content executive, as a key point of contact for the company’s producer and distributor relationships. Kasozi joined Film Constellation in 2018, having worked for the BFI London Film Festival and graduated from the Film Distributors Association’s exhibition, distribution and sales scheme.

Finally, Léo Teste is the new director of sales and distribution, operating from Paris. Since joining the company in 2019, Teste has been part of the sales and financing strategy, securing pre-sales on Taneli Mustonen’s English-language horror The Twin, which is in post-production. He previously worked at mk2 Films as international sales coordinator, and at French audiovisual distributors association SEDPA (Syndicat des Entreprises de Distribution de Programmes Audiovisuels) as managing director.

“This team has been instrumental to our growth and success since we launched five years ago,” said Westerhoff. “Each one of them possess remarkable creative instincts and rigorous dedication to their projects, and to Film Constellation as a whole.”

“We got together in person for a big strategy meeting over a few days, and one of the key outcomes for me was how incredibly well they operate as a team,” he added. “How each one of them has stepped up during the pandemic and taken a leadership position in their role – not just in terms of title, but in terms of revenue and remit and how I see Film Constellation growing as a company.”

On the evolution of his own role Westerhoff said, “I am dedicating a good chunk of my time to the production side. As an executive producer, I’ve been part of the full packaging, financing, fabrication exercise on projects.”