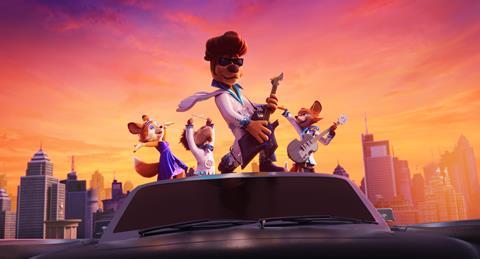 ‘Rock Dog 2: Rock Around The Park’

Both films were produced back-to-back at Splash Entertainment in Los Angeles, in association with Huayi Brothers Pictures and HB Wink Animation, and presented by Lionsgate. Timeless has worldwide sales rights.

It will screen the finished version of Rock Dog 2: Rock Around The Park to buyers, and will provide first images for Rock Dog 3: Battle The Beat, which is due for completion in April.

Screen can reveal an exclusive first look at Rock Dog 2 above.

Lionsgate will release the titles in the US with Huayi Brothers handling distribution in China, both later this year.

The third title, written and directed by Anthony Bell and Rob Muir, sees Bodi join the judging panel of a music talent contest, where he introduces an all-girl pop group to the teachings of his idol Angus Scattergood (voiced by Eddie Izzard).