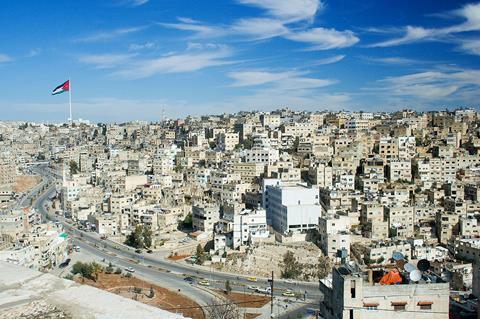 George David, the long-serving managing director of the Royal Film Commission Jordan (RFC), has resigned from his post with immediate effect, the institution has announced.

His departure comes amid a busy time for Jordan as a shooting location, following the introduction in 2018 of a 10-20% cash rebate for productions spending more than $1.43m in the territory and meeting other local crew and line producer stipulations.

In 2018, seven international productions shot in the country including Star Wars: Episode IX and the Netflix series Jinn. It has kicked off the year with the shoot of Niels Arden Oplev’s drama Daniel, following the true story of a young Danish photographer who was captured by ISIS in 2013.

Princess Rym Ali - wife of Jordan’s Prince Ali Bin Hussein who spearheaded the launch of the commission in 2003 – is temporarily taking over management of the body until a new director is appointed.

The princess has been heavily involved in the activities and the development of the institution as an active member of the institute’s board of commissioners since 2006.

“I’m the interim director until we find someone to replace George on a permanent basis. I’ve been following the commission’s activities closely so my husband asked me if I could step-in in the interim,” Princess Rym told Screen.

An approachable figure, the princess was a journalist, whose career included stints at the BBC World Service’s UN Bureau in New York and in Baghdad during the 2003 Iraq War for CNN, prior to marrying into the Jordanian royal family. She said RFC’s activities would continue as before.

“It’s business as usual. Nothing has changed. The tax exemptions and the film incentives are still there. We’re continuing with all the programmes we began. The commission is an institution and it will continue on an institutional basis as before,” she said.

The announcement of David’s departure, in a brief statement on Jan 20, took local and international production professionals by surprise. There were no details on why he resigned or his next move but close sources said he planned to take some time out while considering his options

David joined the commission in its early days in 2005 and played a key role in carrying out its objectives of promoting Jordan as a shooting location at the same time as building a local film industry.

Prior to joining the RFC, he worked in production in Jordan before moving to Los Angeles where he completed a film degree and gained experience on Hollywood productions.

He is credited with helping to attract films like The Hurt Locker, Transformers: Revenge Of The Fallen, Zero Dark Thirty and The Martian to shoot in Jordan.

He also spearheaded a number of educational programmes aimed at nurturing local talent and piloted the creation of the Jordan Film Fund. Over the years, he has come to be known as the face of the RFC and the Jordanian film industry on the international film industry circuit.

Outside of his duties in Jordan, David also served as president on the board of directors of the Association of Film Commissioners International (AFCI).

Aside from continuing its long-running location and educational activities, Princess Rym confirmed that the RFC is also pushing on with its plans to launch the Amman International Film Festival.

The event, aimed at first and second-time directors and nurturing new talent, was first announced at Cannes in 2017 but has yet to see the light of day.

“The festival was delayed while we got the funding on track but we’ve recently set up an NGO, as a sort of off-shoot of the commission, which will oversee the event and its funding and the plan is to launch in April 2020,” she said.

She said the event would likely take place in and around the Abdali neighbourhood of Amman and would include a competition for first and second-time films from the region, sidebars for upcoming filmmakers from other parts of the world and an industry component comprising a project market, workshops and talks.