Prehistoric comedy adventure comes from the makers of Shaun The Sheep and Wallace And Gromit. 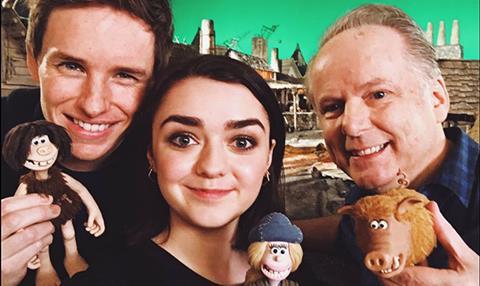 She lines up alongside a cast that already includes Oscar-winner Eddie Redmayne and The Night Manager star Tom Hiddleston.

The actress confirmed the news via her Twitter page.

Very excited to be a part of @earlymanmovie along with Eddie Redmayne and of course the hugely talented Nick Park pic.twitter.com/jmgN53ra6V

Production is currently underway at Aardman’s UK studios in Bristol on the feature, an animated prehistoric comedy adventure about a plucky caveman [Redmayne] who unites his tribe against the mighty Bronze Age in a battle to beat them at their own game.

Williams will voice the character Goona, a gallant and indomitable rebel who befriends the film’s hero.

Oscar-winning Chicken Run and The Curse Of The Were-Rabbit director Nick Park is helming the film. He commented: “Maisie is a terrific actress, and she is of course no stranger to embodying a valiant heroine. I’m most excited to see her breathe life into Goona – I know she’ll be the perfect ally to Eddie’s Dug”.

Williams added: “I’m a huge Aardman fan - having the chance to work with Nick Park is a dream come true, especially as I get to voice such a fantastic character as Goona.  I can’t wait for audiences to meet her”.

Aside from her part in HBO’s Game Of Thrones as the character Arya Stark, Williams’s film roles to-date include Carol Morley’s The Falling and Adam Randall’s forthcoming sci-fi iBoy, which was picked up by Netflix.

Studiocanal is co-financing and will distribute in its own territories - UK, France, Germany, Australia and New Zealand - and will sell worldwide.

The BFI is supporting the development and production of Early Man with National Lottery funding.