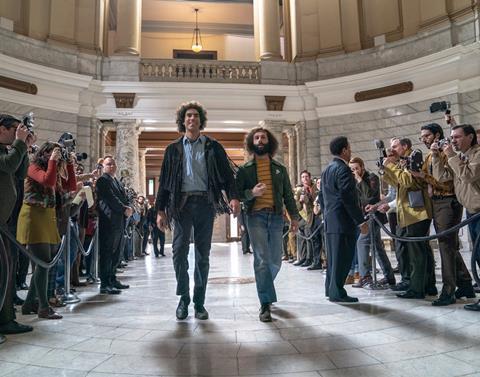 Netflix will debut Aaron Sorkin’s awards contender The Trial Of The Chicago 7 on its platform on October 16.

The streamer acquired worldwide rights to the ensemble drama from Cross Creek Pictures earlier this month after the ongoing pandemic scuppered Paramount’s plans for a US theatrical release.

Netflix announced the news on Twitter on Wednesday (July 22). It remains unclear whether the film will get an accompanying US theatrical release given the uncertainty over cinemas reopening during a surge in Covid-19 cases, however Screen understands the plan is to do so should it be possible.

The streamer has released its films theatrically in other territories in the past and cinemas have been reopening in parts of Europe and Asia.

The Trial Of The Chicago 7 centres on the furore following the arrest and subsequent trial of people involved in a protest at the 1968 Democratic National Convention that turned into a violent clash with police and the National Guard.

The list includes Ryan Murphy’s Broadway adaptation The Prom starring Meryl Streep and Nicole Kidman, which according to a report in The Hollywood Reporter is due to resume production in Los Angeles on Thursday. The film was forced to close when the pandemic struck and had two days left to shoot. Screen had not confirmed this at time of writing.