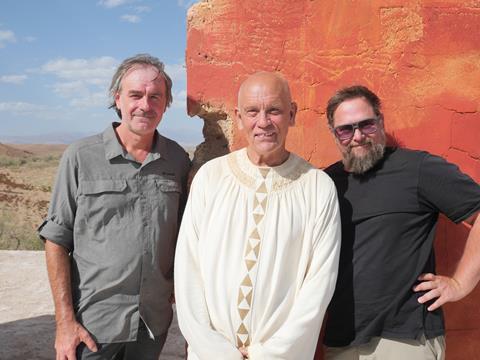 UK actors Tom Xander and Andrew Koji have joined John Malkovich, Geraldine Chaplin and Julian Sands, in the cast of German director Robert Schwentke’s English-language feature Seneca – On The Creation of Earthquakes which began filming on location in the southern Moroccan city of Ouarzazate at the weekend.

Xander plays Emperor Nero who is beginning to weary of the famous Roman philosopher Seneca, played by Malkovich, his teacher, mentor and close advisor since childhood, while the casting of Koji, whose credits include Peaky Blinders and Warrior TV series, marks his second collaboration with Schwentke after appearing in his G.I. Joe spin-off Snake Eyes.

The film is produced by Frieder Schlaich and Irene von Alberti’s Berlin-based Filmgalerie 451 and is co-produced by Annegret Weitkämper-Krug’s Hamburg-based company Gretchenfilm, with with Morocco’s Kasbah Films and backing from broadcaster ZDF/ARTE.

Schwentke’s anachronistic black comedy is set in Rome in 65AD as Nero’s regime is reaching its zenith and the Emperor is using every means at his disposal to defend his despotic claim of sovereignty.