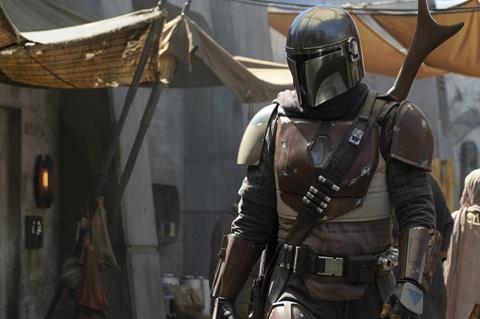 Fuelled by the rise of streamers and in spite of production halts during the pandemic, global spend on film and TV production and licensing of new content by streamers, studios and independents in 2020 soared 16.4% year-on-year from $189.1bn to $220.2bn, a new report says.

In its study ‘An Industry Transformed’ published on Monday (June 28), London-based Purely’s research and analytical service Purely Streamonomics forecast spend will rise to $250bn in 2021.

While the research does not break out spend by streamers, it forecast continued growth in direct-to-consumer (DTC) platforms and is predicated on the understanding that Hollywood and the world’s major entertainment conglomerates have reoriented themselves to put their DTC business front and centre of their greenlight process.

The biggest spender in the world remains The Walt Disney Company with $28.6bn in 2020, more than the $27.7bn committed by all companies across Asia, which saw 19.8% year-on-year growth. The Asian calculation excludes any spend in the region by US companies.

Disney and the next three biggest spenders in North America combined for a $76.3bn outlay in 2020. Warner Bros Discovery spent $20.8bn, Netflix $15.1bn, and Amazon-MGM, the announced merger that is expected to secure US regulatory approval by 2022 if not before, spent $11.8bn. 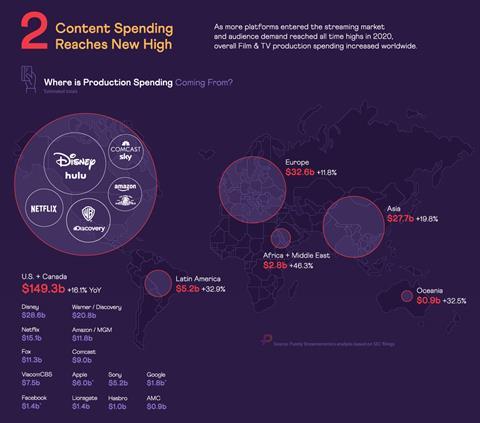 Total North American spend reached $149.3bn and includes the likes of Fox on $11.3bn, Comcast on $9bn, ViacomCBS on $7.5bn, Sony on $5.2bn, Lionsgate on $1.4bn, as well as film and TV production spend in Canada, spend by independents, and third-party activity such as licensing of independent content, co-productions, deficit financing deals and tax credits. All numbers were adjusted to reflect pandemic months.

Production spend from companies in North America climbed 16.1% year-on-year, compared to 11.8% in Europe for a $32.6bn spend. However the report noted regional growth in Europe is expected to rise as local streamers like Viaplay in the Nordics and Moviestar+ in Spain expand their offerings.

Other parts of the world have seen far larger spending growth than North America: Africa and the Middle East was up 46.3% over 2020 to reach $2.8bn, fuelled by fast-growing local platforms like Shahid VIP that recently committed to an additional $100m annual investment in original content. There was a 32.9% gain in Latin America where spend reached $5.2bn, and 23.5% in Oceania for $900m.

All regional figures, and the overall $220.2bn amount, cover production spend and indirect funding through co-financing, co-productions and tax credits, but exclude acquisitions of library titles and back catalogue re-licensing. 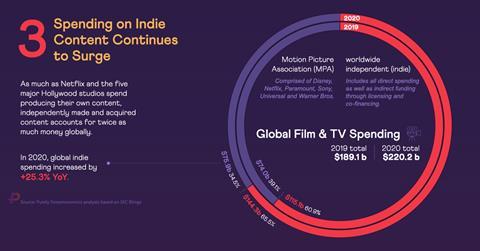 Looking at the $220.2bn 2020 global spend on production and licensing based on Motion Picture Association members and independents, 65.5% of that amount comes from the latter sector as spending surged 25.3% year-on-year from $115.1bn to $144.3bn.

TV budgets on the rise

‘An Industry Transformed’ also showed that average budgets across all new TV series (scripted, unscripted, daytime and children’s shows) climbed 16.5% in the US from $51.2m per episode in 2019 to $59.6m in 2020. The rise was caused by an increase in demand for talent and the costs involved with that, as well as the desire to raise production values to ensure shows stand out from the pack.

Covid-19 protocols forced up production budgets in 2020 by 20%-30%, while the report said green production initiatives could increase costs by 5%-10%.

Audience demand continues to grow as streaming subscriptions increase. Purely Streamonomics estimated global streaming membership in 2020 at 1.1bn compared to 642m in 2019, and forecast the number would reach 1.6bn by 2025. 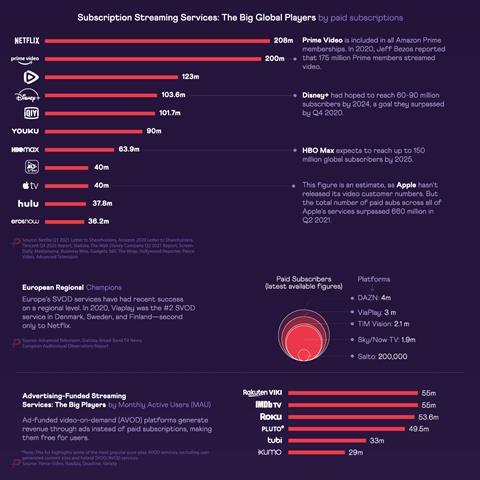 The number was calculated using latest quarterly reports that put Netflix on 208m global subscribers, Prime Video on 200m, Tencent on 123m, Disney+ on 103.6m, iQiyi on 101.7m, Youku on 90m, and HBO Max on 63.9m, among others. Apple’s 40m is an estimate as Apple has not release video customer numbers.

The infographic was created by Visual Capitalist using publicly available data as well as proprietary analysis from Purely Streamonomics based on SEC filings and the latest data compiled by trade organisations around the world.