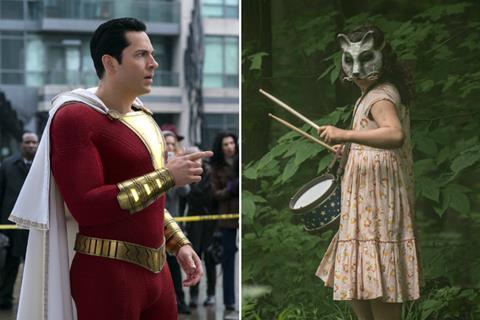 They will challenge Disney’s Dumbo, which opened with a solid £6.1m last weekend.

There’s good buzz around Shazam!, and, as an unconventional comic book feature, the film could provide a good stop-gap for superhero fans now eagerly anticipating the conclusion of the Avengers series on April 24.

The fact that Shazam! Is based on one of the lesser known DC properties may restrict its grosses to the lower end of that scale.

Paramount’s Pet Sematary stars Jason Clarke and Amy Seimetz in an adaptation of Stephen King’s horror about a couple who relocate from Boston to rural Maine with their two young kids and discover a mysterious burial ground hidden deep in the woods near their new home.

A previous adaptation of the book was released in UK cinemas in 1989, grossing £916,841. Stephen King novel adaptations have had their share of successes over the years at the UK box office; recently a new adaptation of It grossed an impressive £32.2m for Warner Bros (a sequel is scheduled for release in September).

Peppa Pig: Festival Of Fun is the latest entry in a series of feature adaptations of the popular children’s animation franchise. Previous entries Peppa Pig: My First Cinema Experience and Peppa Pig: The Golden Boots grossed £3.7m and £2.3m in the UK respectively. The film will be targeting the two-week Easter schools holiday, which begin next week, as an opportunity to reach the typically lucrative family crowd.

Lionsgate’s animated feature Missing Link will also be looking to make the most of the Easter holidays. Zoe Saldana, Hugh Jackman and Emma Thompson are among the impressive voice cast on the film, which is about a trio of explorers travelling the world to help a new friend.

Further new openers include Universal’s The Sisters Brothers. The film is a western starring Joaquin Phoenix and John C. Reilly and is directed by French filmmaker Jacques Audiard, whose credits include Rust And Bone (£835,437 gross in the UK) and A Prophet (£1.4m). His latest film is his English language debut and premiered at Venice last year.

Modern Films has two releases this weekend: Alice Rohrwacher’s Happy As Lazzaro, which premiered at Cannes in 2018, and the event cinema release of Yuli – The Carlos Acosta Story.

Other openers include Dogwoof’s Last Breath, Studiocanal’s Holy Lands, the BFI’s re-release of A Clockwork Orange, and Trafalgar’s event cinema release of The King And I.