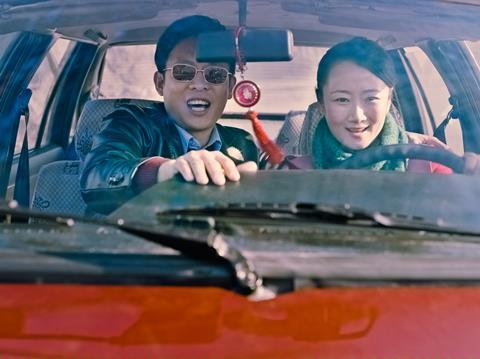 Although Jia Zhangke could well depart with an award at Cannes, Mountains May Departis possibly one of the most calculated and least affecting films he has presented here. Dealing with the changing face of China - past, present and future this time - Jia’s picture is divided into three episodes which map the transition from budding capitalism to economic explosion. Using his characters as pawns on the chessboard of history, Mountains May Depart culminates in a nostalgic future where the Chinese look back for the identity they have lost.

Jia’s plot itself can look like a series of arbitrary choices whose only purpose is to convey the director’s allegorical intentions.

The first section introduces a classic version of the romantic triangle set in the director’s home town of Fenyang in Shanxi province. Young, ebullient Tao (Zhao Tao, the director’s wife and the lead in many of his films) has to choose between the arrogant, cocky, business-oriented Jiusheng (Zhang Yi) and the rock-solid, hard-working miner Liangzi (Liang Jin Dong). Her choice is China’s choice: she goes with the money and Liangzi leaves town.

In the film’s second episode, Liangzi has contracted lung cancer in the mines and moves back home with his wife and child. He finds that Tao is already divorced and her son, named Dollar as per his father’s request, has moved with her ex-husband to Shanghai.

The entire third episode takes place in a future Australia, where the older older immigrant Chinese generation is alienated despite all its accumulated wealth. The younger generation is adrift, trying to guess what and who they are.

The classic 1.33:1 Academy frame used for the 1999 episode could have been determined by Jia’s decision to use old digital footage he shot at the time with his cinematographer, Yu Lik-Wai. The film then moves to 1.85:1 frame for the second episode and to full-size cinemascope for the third. In the same spirit, the sets, the costumes, the means of transportation and even the music, fit the period, though the last episode, set on Australia’s West Coast, seems to suggest nothing much in our lives will change over the next decade, bar tablets and portable phones.

Jia’s plot itself can look like a series of arbitrary choices whose only purpose is to convey the director’s allegorical intentions. The romance of the first episode resembles a mathematical equation. One of the lead characters abruptly disappears without a trace, and Tao’s separation from Dollar for the following 11 years also seems arbitrary, to name but a few incidents.

Zhao Tao carries the first and second part of the picture, with Hong Kong star Sylvia Chang and young Dong Zijian (playing Dollar as 18 year-old) playing out an awkward romance in the final sequence – but if neither leaves a lasting impression, it may be the fault of a script that was more interested in the characters as symbols than individuals. Opening and closing sequences shot to the Pet Shop Boys’ classic Go West are arresting and the film is effectively scored by Yoshihiro Hanno.