Film focuses in on the life of a marginalised worker in contemporary Brazil. 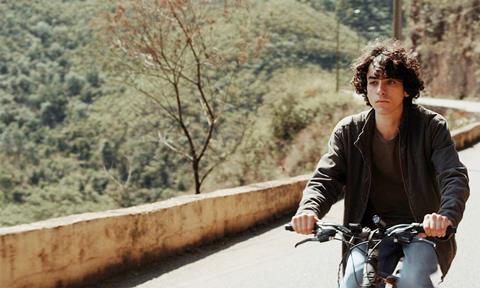 Aráby is the brainchild of Brazailian writer-directors Affonso Uchoa and Joao Dumans. It’s the first directing project for Dumans and the second for Uchoa, who helmed 2016 effort The Hidden Tiger.

The story is set in an old aluminium factory in Ouro Preto, and revolves around a young man who finds the diary of a worker who died in an accident and visualises what he reads. We spoke to the directors ahead of the film’s screening at the International Film Festival Rotterdam.

What was your inspiration for making Araby?

Uchoa and Dumans: Since the beginning, we wanted to say something about our own reality, about the lives and the stories of the young people and workers from our country. But we wanted to do it in a literary way. We wanted to tell these stories as an epic narrative… or maybe as theatre play. We were also inspired by authors who could transform the lives of the common workers, of the unknown people of their time, in narratives with an artistic value (Joyce, Conrad, Dos Passos, Brecht but also some Brazilian authors).

Dumans: We have a very important cinema in Belo Horizonte, called Cine Humberto Mauro, which has been historically a very important place for me. This cinema exists for almost 40 years. That was the place where I learned to watch, to discuss and to understand films together with a group of friends, some of which are now also finishing their first or second features. Along with that, I started working as screenwriter and assistant in Brazilian features on The Residents (2011), The Hidden Tiger (2014) and Where I Grow Old (2016).

Uchoa: I have always liked films, but in the beginning it didn’t seem like something I could do. In 2003, I entered the university and discovered all the possibilities offered by digital cameras. All of a sudden cinema became something more accessible to me, with equipment that didn’t cost the same as a car. I used to write poetry and cinema seemed to me as another way to do poetry. I filmed my first short in 2003.

Dumans: We went to FID LAB, in Marseille, at the very end of the project, when we had already filmed everything. We were in search for funds to finance Aráby’s post-production. It is a very nice festival, with an excellent film program.

Dumans: We worked with a very low budget. That was the worst part. But for us, as directors, I think the main challenge was presenting these common lives in a powerful and respectful way, was refusing to show things in a crude or naturalistic manner, and at the same time trying to be simple, to be clear.

Uchoa: Aráby is at the same time a continuation and detour in relation to The Hidden Tiger, my previous movie, where we worked together for the first time. Both films have the same protagonist (Aristides de Souza), and both are political films in the sense that they focus on the lives of marginalized people. But Aráby is clearly a fictional film, even with some influences from theatrical representation. The Hidden Tiger was more like a documentary, we didn’t have any budget to film, the crew was small, that when I was not filming alone. Aráby is structured in a different way, with other technical and artistic possibilities. Another difference is that I was not alone in the direction of the film, we did it together, so we have the challenge to construct a common point of view.

Dumans: I’ve been working with a group of filmmakers in a series of features, documentaries and short films, all of them related to Brazilian marginal poetry and literature of the 20th century. I’m also working on two new film projects; The Idiot and The Other Life, the last one based on the writings of Simone Weil.

Uchoa: I’m preparing to shoot on march, in the same city where I live in, Contagem. The title of the film is Seven Years In May. I’m also writing a new script for a film called 2019, an adaptation of John dos Passos’ novel 1919 about the Brazilian proletarian and peripheral reality.