Karlovy Vary reaches for the stars

The midpoint between Cannes and Toronto, Karlovy Vary (July 1-9) has still managed to carve out a winning niche. Tom Grater speaks to artistic director Karel Och about this year’s programme. 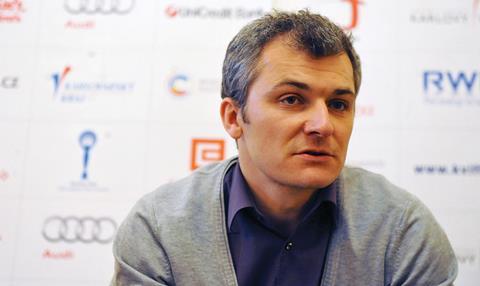 The 51st Karlovy Vary International Film Festival (KVIFF, July 1-9) offers a blockbuster opening film, competition strands filled with premieres, retrospectives and an enhanced industry offering. Opening the festival will be Second World War thriller Anthropoid, starring Cillian Murphy and Jamie Dornan, which was filmed in the Czech capital of Prague. The starry film is quite a coup.

“We followed the project since the beginning because Krystof Mucha [an executive producer on the film] is a director of KVIFF. We could not be more grateful,” says festival artistic director Karel Och [pictured], adding that the film’s UK director, Sean Ellis, was excited about sharing the film with a Czech audience.

This year’s 12-strong main competition, comprising eight world and four international premieres, is made more poignant by the inclusion of the final film from renowned Czech director Jan Nemec, who died in March at the age of 79.

An enfant terrible of the Czech New Wave, Nemec’s 1968 documentary Oratorio For Prague attracted ire from the Communist regime, resulting in the director being banned from making films. He left the country and did not return for more than 20 years. Nemec’s semi-autobiographical final film, The Wolf From Royal Vineyard Street, recounts that chapter of his life.

Another film-maker who is being honoured this year with a retrospective is Otto Preminger. “We have always loved classic American cinema,” says Och, “especially when offered with the charm and subversive sophistication of the film-makers born in Central and Eastern Europe, who left for Hollywood in the 1920s and 1930s.”

Och notes that the festival has had a tribute to Preminger planned for years, but “now just seemed like the right moment” with 2016 marking the 30th anniversary of his death. The director’s 1944 Oscar-winning film noir Laura will have a special screening in Hotel Thermal’s impressive Grand Hall.

Karlovy Vary also focuses on female Mexican film-makers this year, with names including Yulene Olaizola, Tatiana Huezo, Betzabe Garcia, Claudia Sainte-Luce and Victoria Franco all featured. The decision was partly influenced by the wider ongoing discussion about the lack of female representation in the film industry. “Me and my colleagues like to spend time reflecting on the current landscape of the world of cinema,” says Och.

A champion of film

One of the major challenges that continues to face Karlovy Vary is its awkward slot in the festival calendar, occupying the midpoint between Cannes in late May and Venice and Toronto in early September. “I don’t hide the fact we can’t have every film we would love to have, precisely for that reason,” says Och on the KVIFF’s positioning.

However, the strength of the festival’s relationships with film-makers has kept industry personnel flocking back over the years. “Fortunately we have worked hard on our reputation as a festival that champions film-makers and their work,” says Och. “Here you get a lot of affection from the audience.”

This year’s industry offering at Karlovy Vary is enhanced by the opening of the Film Industry Pool, a dedicated space for industry professionals and film-makers to meet during the festival. For the second year in a row, KVIFF will host the annual gathering of the network of independent European distributors, Europa Distribution. It is also again hosting the TorinoFilmLab alumni meeting, with 60 graduates of the programme gathering to discuss this year’s selected topic: the international appeal of the comedy genre.

There will also be 16 projects featured in the Works In Progress line-up, one more than last year, with eight of those competing for the new Eurimages Lab Project Award of $57,000 (€50,000) and the other eight competing for a new KVIFF post-production package worth $115,000 (€100,000), backed by several of the festival’s partners. Another addition is the MIDPOINT screenwriting platform, being held in co-operation with the Sundance Institute, which Och says will feature an “intensive programme” of development assistance for writers.

European Film Promotion’s Future Frames initiative is also returning following a successful first outing, which in 2015 saw Ondrej Hudecek’s short film project Peacock go on to win a special jury prize at Sundance in January. This year’s 10 participants will be mentored by Felix van Groeningen, the director of Sundance winner Belgica, which will be screened at the festival.