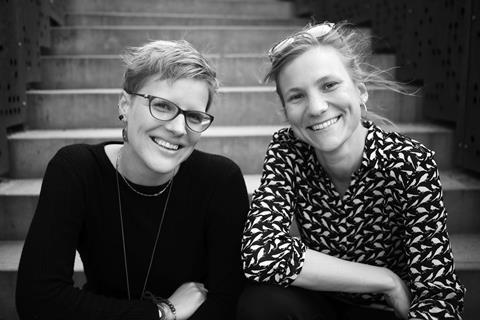 Hungarian filmmakers Asia Dér and Sári Haragonics are competing at the Sarajevo Film Festival with documentary Her Mothers.

The film, which received its world premiere at Hot Docs, follows a lesbian couple - former green politician Virág and musician Nóra - as they decide to adopt a child in the increasingly radicalized Hungarian society.

After a long and complicated process, they bring home their young daughter of Roma origin. But tensions begin to rise between the two as Virág thrives in her role as a mother and Nóra struggles to find her place within the family.

What inspired you to make this film and how did it all come together?

Sári Haragonics: While we were working on a small doc series in Norway in 2015, we met a Hungarian gay couple who moved there with their adopted child. They told us that most of the rainbow families leave Hungary the moment their adoptions come through because of the hostile atmosphere. On our way back home, we talked about this a lot and felt we wanted to explore and show a similar story in an intimate documentary. We heard from a friend that Virág and Nóra were waiting for adoption so we reached out to them. They were open and inspired to make the film so they could tell their story to their future adopted child.

What was the biggest challenge when you were making the film?

Asia Dér: One of the biggest challenges was definitely the lack of funding. We had to come up with a way to be able to film for three years. We quickly realized that we had to make this film as a two-person crew and that we had to buy the equipment ourselves. This also set the tone of the film: we became so much part of the girls’ life that their friends and family took it for granted that we were there at the most intimate moments. Producers Sára László, Noémi Veronika Szakonyi and Gerő Marcell stood behind us for all the years of filming. After finishing the shooting a very talented group of people joined the crew to be able to finish it with the quality we aimed for: Flóra Erdélyi as editor, 4CUT did the sound post production and Janó Fekete the colour grading.

How did you decide to focus on the problems with raising the child and how it affects their relationship, as opposed to obstacles posed by Orban’s government?

SH: From the beginning we knew we didn’t want to make an activist film, but instead an intimate account of a family. Through seeing Virág and Nora’s life and decisions, their everyday struggles and joy, one can relate to them more easily than if we focused on political issues. But to fully understand the story, we couldn’t leave out the environment and political climate we live in.

AD: I think these kinds of narrative decisions came due to the nature of the protagonists as well. When we started filming, we intended to focus more on the circumstances of adoption as a gay parent in Hungary. But the girls were fed up with politics and wanted to concentrate on their own little bubble, especially after getting their daughter. We didn’t want to force our “logline” on them. Also this is how it goes with long-term filmmaking: you have a more universal concept when starting off, and after getting to know the protagonists you get more personal with their story and the way you want to show it.

How did you get into the film industry?

SH: I finished the Documentary Film Directing MA course at the University of Theatre and Film Arts in Hungary, which, besides a tremendous amount of knowledge and experience, also gave me a lot of belief in making documentaries and not giving up in spite of the lack of funding or other difficulties. My graduation film, Coming Face to Face, was screened at several festivals and received a lot of positive feedback from its audience. This gave me a lot of strength in continuing to bring more real human stories to people.

AD: I knew quite early I’d like to make films. Before graduating as a documentary director at DOCNomads, I worked as AD on a few fiction films. I quickly realized that the process of making documentaries is much closer to my personality and the way I connect to people in everyday life.

Do you have any first-day rituals on set to perhaps establish a working tone?

AD: I don’t have a particular ritual for the first day, but in general I like to spend some time with protagonists after the filming. For example, with Nora and Virág, as we stayed overnight at their place many times, we used to open a bottle of red wine and sit around (in the summer by the campfire that Nora would make) and talk. I feel these hanging-out evenings are necessary after hours spent together in one room pretending that we don’t exist. We would go insane.

SD: It was also important that before we started filming we had met with Virág and Nóra several times and told them what interests us in their story, and discussed the possible obstacles. This honest environment helped us through the filming and in the most intimate moments that we spent with them.

How have the last few months been for you, and how do you feel about premiering your film online at Hot Docs and now Sarajevo?

AD: Besides the fact that we are extremely happy to be part of these festivals, there is a great sadness about it too. I imagined many times how it would be after finally finishing this film to arrive at a festival, checking on the audience if they are laughing where they should laugh, and cry in spots where we hoped for them to be touched… and at the end look them in the eye and hear their feedback. None of this is happening. But there are many of us in the same boat which helps us cope with it. And festivals are trying their best to get the most out of the situation too.

SH: I am trying to focus on the fact that the film is finished and no one can take that away from us, not even COVID. It’s difficult not being there at our world and European premieres, but I believe that in the coming years many people will get the chance to watch the film and we will have the possibility to talk to them or receive their feedback.