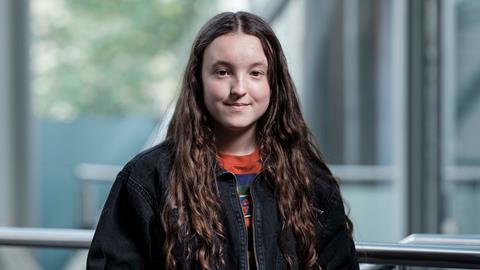 Time has passed since Bella Ramsey, then aged 11, made her mark in HBO’s Game Of Thrones, but the 18-year-old is still recognisable from that role. Things, however, have changed in her life. Now an aspiring writer and director as well as actress, she has just shot the lead role in Lena Dunham’s version of Karen Cushman’s 13th-century-set novel Catherine, Called Birdy. (She will also be seen as Lady Jane Grey in Starz series Becoming Elizabeth.) “Lena was so open-minded and wanted the best for everybody,” Ramsey says. “I learned you’re allowed to have an opinion about things, you’re allowed to bring your own taste, and you’re allowed to bring yourself to the part.”

Ramsey may be young, but she is very experienced, and quite a long way from her acting debut as the back end of a cow (her older sister played the front) in a production of Jack And The Beanstalk at her local Stagecoach Performing Arts School in Loughborough, Leicestershire. “We were called the Ramsey cow. It was literally the highlight of my time there,” she laughs. After leaving Stagecoach, Ramsey joined the Tele­vision Workshop in Nottingham, attending every Saturday. “I was obsessed with it. I loved the fact they were saying acting wasn’t lying or pretending, it was about being, and that excited me so much.”

Through the Television Workshop, she scored an audition for Game Of Thrones, winning the role of noblewoman Lyanna Mormont in season six, aged 11. The part was meant to last one episode, but she ended up staying for three seasons. By the time her first episode aired, Ramsey had already scored the lead role in CBBC’s The Worst Witch — as well as a London agent — winning the Children’s Bafta for young performer in 2019. Roles in Holmes & Watson, Marcel Marceau biopic Resistance, season two of His Dark Materials, and Judy (as a young Lorna Luft opposite Renée Zell­weger’s Judy Garland) followed.

Currently in Canada filming HBO’s epic TV series The Last Of Us, adapted from the video game of the same name, Ramsey is also planning a career behind the camera, starting with a semi-autobiographical script she started writing at 14, which has a producer attached. “It’s about a girl and her relationship with her eating disorder but done in a way that’s hopeful and not always dark,” says Ramsey, who is repped as a writer by Katie Langridge at Knight Hall. “I loved writing it and I definitely want to write more, and maybe direct at some point. Exploring the industry in all its glory is my plan.”