The Kids are alright: how animation indie GKids broke the studio awards monopoly

How New York-based GKids has taken on the animation giants, with no fewer than five titles in contention this awards season 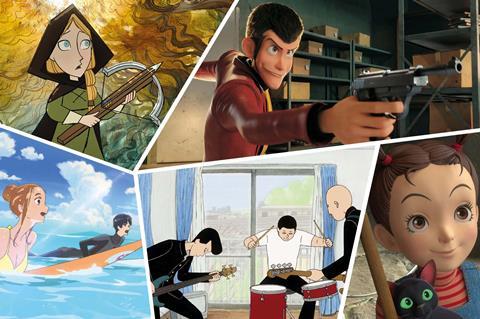 Clockwise from top left: ‘Wolfwalkers’, ‘Lupin III: The First’, ‘Earwig And The Witch’, ‘On-Gaku: Our Sound’, ‘Ride Your Wave’

Each year a handful of independent animation specialists squeeze onto the list of awards hopefuls alongside Pixar, DreamWorks Animation, and other studio and streamer giants. New York-based GKids is one such specialist. Over the past decade, the North American distributor has carved a niche as a purveyor of world-class 2D animation, earning 11 Oscar nominations along the way. The privately held company is in contention again this season with Wolfwalkers, Ride Your Wave, Lupin III: The First, On-Gaku: Our Sound and Earwig And The Witch.

Wolfwalkers has garnered plenty of attention this season, including a Golden Globes nod in the best animated picture category. It is the latest feature to hail from Cartoon Saloon, the Irish animator with which GKids CEO Eric Beckman and president David Jesteadt have cultivated deep ties since 2009. It was the Kilkenny-based company that inspired GKids to officially move into distribution after it had dabbled in limited rights. Beckman had been running New York International Children’s Film Festival, where he screened Cartoon Saloon’s debut feature The Secret Of Kells in 2009. When the film’s sales agent told him US rights were available, he pounced.

Three days later, GKids had signed the contracts, cut a trailer and qualified Kells for Oscar consideration. Cartoon Saloon co-founders Tomm Moore, Paul Young and Nora Twomey were impressed, and The Secret Of Kells went on to earn both companies their first Oscar nomination.

They have marched in lockstep ever since, earning animation feature Oscar nods for 2014’s Song Of The Sea and 2017’s The Breadwinner. “They feel as much friends as they do business partners at this point,” says Beckman, who along with Jesteadt is an executive producer on Wolfwalkers. Cartoon Saloon and Luxembourg’s Melusine Productions produced the 17th-century-set tale of a hunter dispatched to eradicate Ireland’s last wolfpack, only for his daughter to befriend a mysterious tribe.

Asked what defines a GKids film, Beckman says: “Ultimately it’s the proposition that animation as a cinematic art form is as broad and deep as it can be. It just seemed to us that the potential for animation was much deeper and more exciting than [what was in the market].”

Despite the company name, most GKids films cater to more mature tastes, like sultry UK-Spain romance and Oscar nominee Chico & Rita, or French graphic-novel adaptation MFKZ. “The name GKids is misleading,” Beckman admits. “We certainly have R-rated films and hard Rs and if we could go back in time we might come up with a different name.”

The company distributes eight to 12 titles a year (eight in 2020). These have included Japanese anime such as Promare and Weathering With You, the company’s biggest hit to date on just under $8m at the US box office. 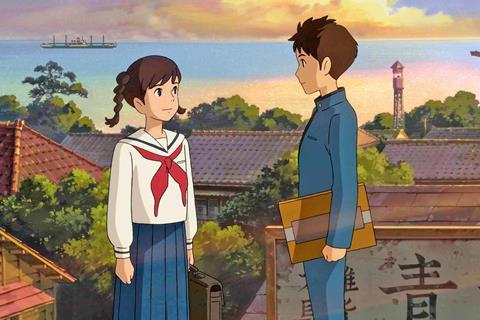 ‘From Up On Poppy Hill’

A long relationship with Japanese animation powerhouse Studio Ghibli provided further motivation for GKids to move into distribution in the early days. Wearing his children’s festival hat, Beckman would lobby Disney for premieres. At the time, the studio held rights to the Studio Ghibli catalogue in North America and select territories, until the Japanese company invited Beckman to handle US theatrical releases.

GKids’ first Ghibli title was From Up On Poppy Hill in 2011. It eventually took on North American rights to the home-video catalogue, then all digital rights in North America, and led worldwide negotiations for streaming on Ghibli’s behalf.

Now HBO Max has US streaming rights and Netflix has international excluding Japan. GKids handles electronic sell-through (EST) in North America, and Wild Bunch and select territory distributors oversee international. An English-language dub of upcoming Ghibli release Earwig And The Witch led by Richard E Grant and Dan Stevens is in the pipeline for a release this year, alongside titles such as Inu-Oh from Masaaki Yuasa and 26-episode series Neon Genesis Evangelion on Blu-ray and EST.

GKids has grown to accommodate around 20 staffers and a satellite office in Los Angeles as the landscape has evolved. “[Years ago] every once in a while Sony Pictures Classics would have a few films,” notes Jesteadt, GKids’ first employee who joined in 2007 after graduating from New York University’s cinema studies programme. “But a lot of the more traditional independent distributors and mini-majors weren’t doing animation unless, say, Wes Anderson wanted to make a project.

“The encroachment and ramp-up into production by the streaming services has been one of the biggest new factors in animation,” he continues. “A lot of the early films we worked on were created under specific European co-production models. That financing can take years, so having these services in play now that can acquire significant projects out of the markets and also underwrite the films early on has started to upend the landscape among more traditional players.”

European animation still relies heavily on the co-production model, one example being Song Of The Sea, put together by Cartoon Saloon and Melusine with The Big Farm (Belgium), Superprod (France) and Norlum (Denmark). GKids maintains a close relationship with the streamers. “It’s one of those unusual dynamics [that] a lot of independent distributors are working with, where you’re going after some of the same films, and you end up working together in different arrangements,” says Jesteadt.

GKids was scheduled to release Wolfwalkers on 500-plus screens in mid-November, which would have been the widest release yet for a film from Cartoon Saloon (which handles international theatrical rights). The pandemic scuppered those plans, so it helped that Apple had financed the film and held worldwide video rights.

“In terms of the sheer number of people able to experience the film [on Apple TV+], that’s ultimately to the film’s benefit in terms of reaching the true audience,” says Jesteadt.

In a devastating year for theatrical distribution, Beckman says the company has been able to weather the storm at least in part due to an increase in digital sales, and held on to all its staff. Over the years, GKids has also been boarding more titles at an earlier stage. “We’re actively involved in development and production and have projects we’ll be announcing soon,” says Beckman. “We feel we know and love and understand the medium and what it takes to be a great film.”