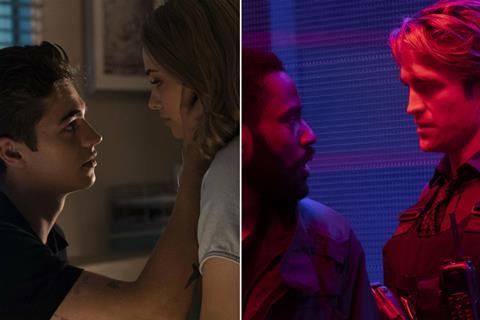 ‘After We Collided’, ‘Tenet’

Young adult sequel After We Collided scored an enormous 152% increase on its previous weekend total, as blockbuster Tenet stayed top for a third consecutive session.

Released in the UK and Ireland through Shear Entertainment, the second in the After series grossed £443,328 from Friday to Sunday, up from £174,645 last weekend.

Starring Josephine Langford and Hero Fiennes Tiffin, After We Collided is the latest in the adaptations of Anna Todd’s romance novel series, with this edition directed by Roger Kumble.

As of Sunday evening, it had grossed $20.9m at the international box office.

Tenet held top spot for a third consecutive weekend with a £1.2m session representing a 41% drop on its previous outing. It has now grossed £12.5m; director Christopher Nolan’s lowest-grossing blockbuster title to date is the £16.6m of 2005’s Batman Begins, although all of his previous tentpoles were released in the pre-coronavirus theatrical climate.

It was a decent weekend for a second teen title: Trafalgar Releasing’s Break The Silence brought in £249,997, mainly from Saturday and Sunday screenings following a Thursday event debut. The latest concert film from K-pop sensation BTS has £374,060 in total.

The Broken Hearts Gallery, another youth-oriented romance, brought in £80,000 for Sony from 492 locations, with several sites still to report. Natalie Krinsky’s feature stars Geraldine Viswanathan and Stranger Things’ Dacre Montgomery in the story of a heartbroken young woman who decides to start a gallery where people can leave trinkets from past relationships.

Former number one Unhinged starring Russell Crowe took £60,731 from 274 venues – a respectable 38% drop after 14 sessions, bringing it to £1.6m. Distributor Altitude also has Ladj Ly’s Oscar-nominated Les Misérables, which added £31,270 on its second session to reach £121,066.