‘Another Round’ date confirmed as UK-Ireland release schedule takes shape 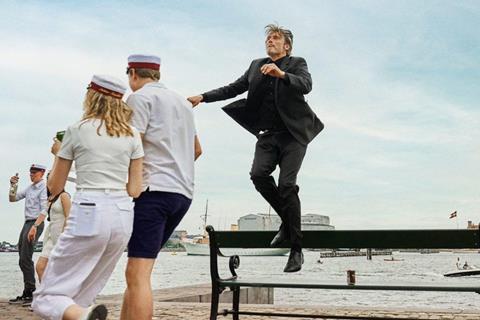 Studiocanal’s two-time Oscar nominee Another Round has confirmed its new UK-Ireland release date as June 25, 2021.

The Danish film, which received Oscar nominations in best director for Thomas Vinterberg and in international feature film, was originally scheduled for release in the territory on November 27.

That date was delayed, and the film removed from the release calendar, in early November, when the UK and Ireland entered into second coronavirus lockdowns.

Another Round had been set to premiere in Competition at Cannes 2020, before the event was cancelled; it received the Cannes Official Selection title, and had its world premiere at Toronto in September 2020.

It has four nominations at the 2021 Baftas, in best director, best actor for Mads Mikkelsen, best film not in the English language, and original screenplay for Vinterberg and Tobias Lindholm.

The Baftas will take place across two days on April 10 and 11; with the Oscars on April 26.

Distributors in the UK and Ireland are starting to fill up the release calendar ahead of the reopening of cinemas (May 17 in England; no date confirmed for Wales, Scotland, Northern Ireland or Ireland, with the Irish government’s next update on Tuesday March 16).

Another Oscar title, Darius Marder’s six-time nominee Sound Of Metal, will be first out the gate on May 17 through Vertigo Releasing. The drama, about a heavy metal drummer who suffers sudden onset hearing loss, will hope to capitalise on audiences keen to return to the big screen after five months away.

On the first weekend for cinemas in England, new films are set to include Sony’s Peter Rabbit 2: The Runaway (one of the first studio films to move date due to Covid, back in March 2020); Disney’s adventure comedy Free Guy starring Ryan Reynolds and Jodie Comer; Lionsgate’s Spiral, the latest in the Saw franchise; and Billie Piper’s directorial debut Rare Beasts.

Heading into June, A Quiet Place Part II is another long-delayed film hoping to cross the release threshold, through Paramount on June 4. Lionsgate’s The Father, also a six-time Oscar nominee including in best picture, best actor and best supporting actress, lands the following week on June 11.

Competition for Another Round on June 25 will include Lin-Manuel Miranda’s Warner Bros musical In The Heights, and Sony’s blockbuster sequel Venom: Let There Be Carnage, as well as Cathy Brady’s award-winning Wildfire.