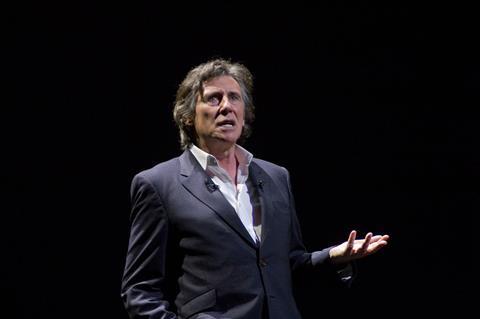 Celluloid Dreams has acquired world sales rights on Matt Bissonnette’s Death Of A Ladies’ Man starring Irish actor Gabriel Byrne as a hard-drinking, womanising, university poetry professor who unexpectedly finds love when he retreats to a shack in Ireland after discovering he has a brain tumour.

Bissonnette, whose credits include the 2009 comedy drama Passenger Side, will direct from his own script. Other cast members include Quebecois actor Antoine-Olivier Pilon, best-known for his award-winning performance in Mommy.

Byrne’s character Samuel O’Shea has seen better days as the film opens. His second marriage is ending and he has started seeing strange things such Frankenstein sidling up to him in a bar, or his much-missed late father popping in for a chat.

When Samuel discovers he has a brain tumour, which may be the cause of his strange visions, he enters a more reflective period of his life, moving to his family’s remote shack, where he embarks on the novel he has been meaning to write all his adult life and unexpectedly falls in love with a local woman. This trajectory leads Samuel to an utterly unforeseeable happy ending.

The title of the film is taken from Leonard Cohen’s 1977 album, and the script was inspired by the work of the late Canadian poet and musician, including themes of love, loss and the relationship between fathers and sons.

Cohen’s music and verse will be woven throughout the film supported by his blessing of the project prior to his death in 2016 and the continuing support of his management.

“I’m extremely proud of our involvement in Death Of Ladies’ Man. The script literally sings with its significant messages about the ephemeral but vital nature of life,” said Celluloid Dreams president Hengameh Panahi.

“It’s vibrant with humour and poetry, which is no surprise given the influence of Leonard Cohen, truly one the seminal artists of our time. Samuel O’Shea is an unforgettable character—viewers will be with him every step of the way on his journey.”

Producer Corey Marr added: “We are thrilled to be partnering with Celluloid Dreams to bring Matt Bissonnette’s beautiful film to the world, and we are excited about the passion and confidence Hengameh, Charlotte [Mickie] and the rest of the Celluloid team have shown in the film’s worldwide prospects.”

Production begins in Montreal and the west-coast of Ireland this summer.

The movie will be made with the support of Monte Rosso Productions, Bell Media’s The Harold Greenberg Fund and The Movie Network (TMN), and The Canadian Broadcasting Corporation (CBC). Mongrel Media is the Canadian distributor and Element Pictures will release in Ireland.