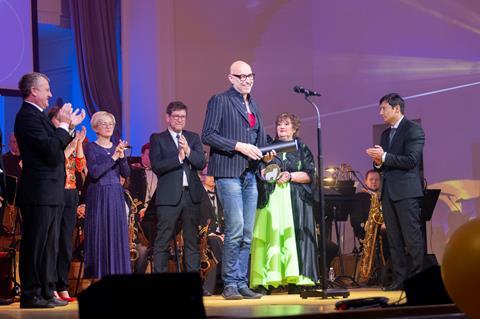 Andreas Kleinert’s German drama Dear Thomas has been awarded the Grand Prix at the 2021 Black Nights Film Festival, held in the Estonian capital of Tallinn.

It marks the latest feature of prolific Germany filmmaker Kleinert, known for titles such as Leb Whol, Joseph; Lost Landscape; and Head Under Water, which screened at Locarno, San Sebastian and Venice respectively. His drama Paths In The Nights opened Cannes Directors’ Fortnight in 1999 and feature Barriere screened at the Berlinale in 2010.

Dear Thomas, which premiered at Munich International Film Festival in July, is produced by Zeitsprung Pictures and sold by The Match Factory.

Kleinert was in Tallinn to accept the honour, which includes a grant of €20,000 to be shared with producers Till Derenbach and Michael Souvignier.

The international jury, led by EFA chairman Mike Downey, praised the film for its “masterly execution of the biopic form” and “for throwing an essential light on one of the seminal figures of German letters”.

Polish filmmaker Wojciech Smarzowski won best director and €5,000 for The Wedding Day, which mixes the stories of a wartime tragedy in a Polish village with that of a contemporary wedding to spotlight modern day corruption and xenophobia. Smarzowski also won the best screenplay award.

Further prizes saw the best cinematography award presented to Emre Tanyildiz for Turkish drug dealer drama The List Of Those Who Love Me, directed by Emre Erdoğdu.

The best actress award went to 11-year-old Russian Sofia Krugova for her portrayal of a daughter caught between comically ultra-violent mother and grandmother in Kirill Sokolov’s No Looking Back.

Best original score prize went to Finland’s Esa-Pekka Salonen for his score for The Wait while Hungary’s Anna Nyitrai picked up the best production design award for dystopian drama Perpetuity.