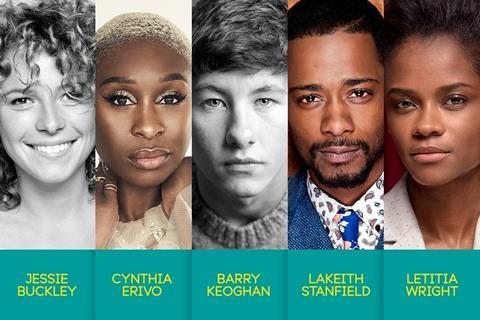 Bafta has announced the five actors in the running for the 2019 EE Rising Star Award.

Actress and singer Jessie Buckley made her breakthrough in 2017’s Beast directed by Michael Pearce. Her latest is Wild Rose, about a Glaswegian musician who dreams of becoming a Nashville star, which debuted at Toronto and is set for release in April 2019.

Tony, Emmy, and Grammy Award-winning actress Cynthia Erivo is best known for playing Celie in the 2015 Broadway revival of The Color Purple. This year, she starred in both Drew Goddard’s Bad Times At The El Royale and Steve McQueen’s Widows. Her upcoming projects include Chaos Walking, from director Doug Liman and John Ridley’s Needle in a Timestack.

Barry Keoghan starred opposite Colin Farrell and Nicole Kidman in Yorgos Lanthimos’ The Killing Of A Sacred Deer and appeared in Christopher Nolan’s Dunkirk and Bart Layton’s American Animals – for which he was nominated for a best supporting actor BIFA in 2018.

Lakeith Stanfield starred in Boots Riley’s Sorry To Bother You and Crown Heights, winner of the audience award at the 2017 Sundance Film Festival. He also appeared in Get Out, War Machine and FX series Atlanta.

Letitia Wright played Shuri in box office smash Black Panther, reprising the role in Avengers: Infinity War. She has also been nominated for an Emmy Award for Black Mirror. She is currently starring in The Convert at The Young Vic Theatre in London, and will star opposite John Boyega in sci-fi Hold Back The Stars.

The winner will be voted for by the public and announced at the British Academy Film Awards on Sunday February 10.

Read more: Bafta shifts dates for 2020 film awards to stay ahead of Oscars