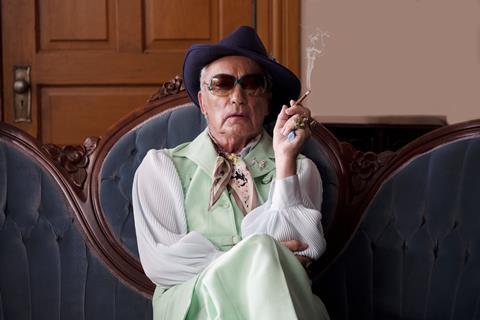 Torres and Magnolia international sales director Marie Zeniter attended Cannes for what proved to be a productive trip.

Magnolia will distribute in the US on August 6, and Mongrel in Canada on August 13. Todd Stephens directed Kier in the drama about a retired Ohio hairdresser who escapes the confines of his nursing home when he learns about his client’s dying wish for him to style her final hairdo.

Mayday, which stars Grace Van Patten, Mia Goth, Soko and Juliette Lewis, has gone to Volga for CIS and Front Row for Middle East. Magnolia plans an autumn US release on Karen Cinorre’s film about a young woman who joins a female army in a mysterious realm, only to discover she may not be the killer they want her to be.

The first deals out of Cannes on Queen Of Glory have seen Front Row pick up rights for Middle East and AAA for Africa. Nana Mensah’s feature directorial debut (she starred in Farewell Amor and Netflix’s upcoming dramedy The Chair with Sandra Oh and Jay Duplass) won the best new narrative director prize at Tribeca Festival and centres on a Ghanaian-American woman who unexpectedly inherits a Christian bookstore in the Bronx. Mensah stars alongside Meeko Gattuso and Adam Leon.

Magnolia International has licensed Sundance Midnight selection A Glitch In The Matrix to Madman for Australia and New Zealand, Movistar Telefonica for Spain, and Mediawan for France. Rodney Ascher’s documentary posits the notion that we exist within a Matrix-like structure and previously sold to Dogwoof for the UK, NonStop for Scandinavia, Baltics and Iceland, Capella Films for CIS, and Ale Kino + for Poland. Magnolia Pictures and Mongrel released it in the US and Canada, respectively, on February 5.