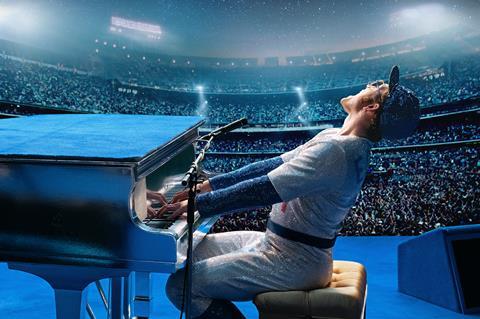 Paramount, the BFI and Picturehouse Entertainment were among the winners at the 2019 Screen Awards, which recognises excellence in UK distribution, exhibition, marketing, publicity and brand partnerships.

The awards were handed out at the Ballroom Southbank in London tonight (November 28), with actress and comedian Sally Phillips hosting the ceremony for the first time.

Paramount Pictures UK won the prestigious distributor of the year award, after releasing Rocketman, Bumblebee and Instant Family during the eligibility period. One judge praised Paramount for “establishing a voice in the studio space for more than just franchise films”. Eve Gabereau’s Modern Films was highly commended in the category.

Paramount also won the theatrical campaign of the year – 200 sites and over prize for Rocketman, which took £23.4m at the UK box office in 2019 and was the highest-grossing British film of the year.

The 199 sites and under award went to BFI Distribution for Bait, with Mark Jenkin’s black-and-white Cornish fisherman drama also winning the best British film award, voted for in an online poll by readers from a top 10 list selected by Screen International’s critics. UPHE Content Group was highly commended for Mandy in the 199 sites and under category.

As previously announced, Judi Dench was the recipient of the outstanding contribution to British Film achievement award, which was presented to her by Shakespeare In Love director John Madden, who said: “She’s a person who’s incapable of a false gesture on stage or screen, or indeed in life, because she doesn’t presume to know how a character might behave in any situation, until she experiences it for the first time, before the audience or the camera.”

There were six new categories for 2019. In previous years, documentary and foreign-language film releases competed in the same category - specialist film campaign - but this is now divided into two separate categories.

The first winners were UPHE Content Group and Dogwoof, who won the documentary prize for Apollo 11, and Picturehouse Entertainment, picking up the foreign film award for Nadine Labaki’s Capernaum. The latter also picked up trailer of the year.

PR Campaign was also re-introduced for 2019, replacing the PR Team of the year categories (agency and in-house), with Republic Distribution and Way To Blue winning with For Sama. Premier and 20th Century Fox were highly commended for The Favourite.

Curzon won the prestigious marketing team of the year award.

The cinema of the year prizes went to Rio Cinema, Dalston (for 24 screens and under) and West Norwood Picturehouse (for 25 screens and over).

Finally Dartmouth Films’ Wayne D’Cruz won the rising star category; Sam Ashby and Curzon took home the ever-competitive poster of the year prize for The Souvenir; and Pearl & Dean won brand partnership of the year for their Bohemian Rhapsody campaign.

Documentary film release of the year

Foreign-language film release of the year

Poster design of the year

Brand partnership of the year

Marketing team of the year

Cinema marketing campaign of the year - sponsored by Movio

Trailer of the year - sponsored by Powster

PR campaign of the year

Event cinema campaign of the year

Cinema of the year, 24 screens or under - sponsored by Mubi Go

Cinema of the year, 25 screens or over - sponsored by Comscore

Best British film of the year - sponsored by ScreenSkills

Distributor of the year - sponsored by EIKON