Richard E. Grant calls for 'best casting' award to be created by Bafta and Oscar 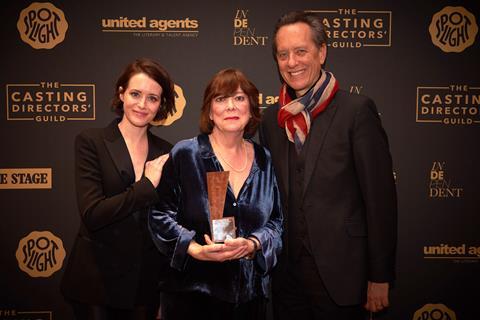 Oscar nominee Richard E. Grant has called on Bafta and the Oscars to introduce best casting categories, saying casting work has been “astonishingly un-celebrated” by the film industry.

“I’ve wondered whether it’s because it’s female-dominated that it hasn’t been as to the forefront of other awards,” Grant told Screen at the inaugural Casting Directors Guild (CDG) awards in London last night (February 12).

“There should be a category for them [at the Baftas and Oscars]. Casting director comes up in the list of credits so far ahead now compared to where it was 10 years ago,” he continued. ”I genuinely do not understand why there is no category for them in the big awards ceremonies.”

He presented the best film casting prize to Debbie McWilliams for Film Stars Don’t Die In Liverpool at the awards.

“To be not recognised by the rest of the film industry is soul-destroying,” said McWilliams. ”We just weren’t going to wait any longer, we just decided to do this, and to get the first one is wonderful.”

She called on the Baftas and Oscars to “take note”, saying casting directors “provide the beating heart of any film.”

Casting director Victor Jenkins, chair of the CDG board and awards committee, said “Casting is a crucial part of the creative process and we want to commend not just the alchemy of our craft, but also our unique position within the industry.”

“We hope that this is the beginning of wider recognition for casting directors and will lead to the creation of a casting category within other industry ceremonies.”

Attended by casting directors, actors, producers and directors from across the entertainment industry, the UK event was created to celebrate the casting achievements in film, TV, theatre and commercials.

Charlotte Bevan, director of the creative diversity project at the National Theatre, received the outstanding contribution to the casting profession prize.