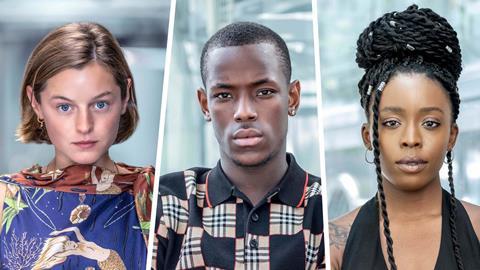 Screen unveils the 2020 Stars of Tomorrow

Screen International has unveiled Stars of Tomorrow 2020, its annual, eagerly anticipated talent showcase of the most exciting new actors, writers, directors, producers, and heads of department emerging across the UK and Ireland.

For the first year, Screen has partnered with a headline sponsor, Amazon Prime Video, alongside returning partners ScreenSkills and the BFI London Film Festival.

Screen International has a highly regarded track record of spotting talent early, and this year’s UK & Ireland Stars of Tomorrow will be following in the footsteps of some of today’s biggest names in film and television, many of whom are BAFTA and Oscar winners and nominees.

From Emily Blunt and Benedict Cumberbatch in the inaugural selection in 2004, Phoebe Waller-Bridge and Taron Egerton in 2014, Florence Pugh and Jodie Comer in 2016, to Himesh Patel and Rapman last year, Screen International’s UK & Ireland Stars of Tomorrow alumni are now among the leaders of the global industry.

Fionnuala Halligan said of this year’s selection: “At a time when the push for full diversity in film and TV is becoming more and more urgent, Screen is proud to maintain its record of inclusion, having brought David Oyelowo, Daniel Kaluuya, Sophie Okonedo, Noel Clarke, John Boyega, Letitia Wright, Michaela Coel, Dominic Buchanan, Cush Jumbo, and many others to industry attention at the start of their careers.”

Screen International editor Matt Mueller said: “In this unusual year, it felt more important than ever to shine this spotlight on emerging UK and Irish talent, and we’re proud of the selection and excited to see the strides they take in their careers. Congratulations to our Stars and thanks also to supporters including Amazon Prime Video, who we’re thrilled to welcome on board as headline sponsor. Their support is fantastically encouraging, alongside the ongoing support we receive from our long-term partners ScreenSkills and the BFI London Film Festival.”