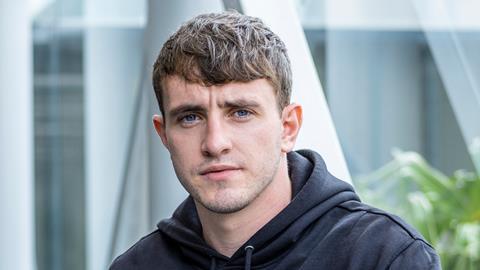 Paul Mescal began his professional career before he had even graduated drama school: he snagged the title role in The Great Gatsby at Dublin’s Gate Theatre in 2017.

Lir Academy, part of Trinity College Dublin, agreed to exempt him from the year’s final production, instead assessing his work in the F Scott Fitzgerald adaptation.

A two-year whirlwind of back-to-back stage work followed, including The Plough And The Stars at London’s Lyric Hammersmith, A Midsummer Night’s Dream and A Portrait Of The Artist As A Young Man in rep with Dublin’s Rough Magic Theatre Company, and Asking For It at the Abbey Theatre in Cork.

Mescal acquired his agent Lara Beach at Curtis Brown while still at college, and it was through her that he was invited to audition for the role that propelled him from rising theatre actor to Emmy-nominated screen star: Connell Waldron in Element Pictures’ Normal People. Despite the actor’s very limited screen experience (a two-day supporting part in a TV pilot that looks unlikely to air), Mescal was confirmed in the role midway through the chemistry reads to determine the female lead. His reaction to the news: “Immense joy, a huge amount of relief, and then fear.”

The show’s lead director Lenny Abrahamson was “incredibly collaborative in terms of his discussion around character”, helping the actor feel “totally empowered”. The elusive nature of the material (“It is not explained to you 90% of the time what Connor in particular is feeling”) presented an opportunity to deliver a textured performance that hints at the character’s inner turmoil.

Mescal resisted a rash of US agent offers that followed his Normal People casting, waiting for the right opportunity. CAA’s Chris Andrews and Zach Kaplan reached out only after watching Normal People footage (“Their response was really articulate and well-judged”), and Andrews flew to Dublin to see Mescal perform in The Lieutenant Of Inishmore at the city’s Gaiety Theatre. Next for the actor is his big-screen debut in The Lost Daughter, adapted from the 2006 Elena Ferrante novel and directed by Maggie Gyllenhaal.