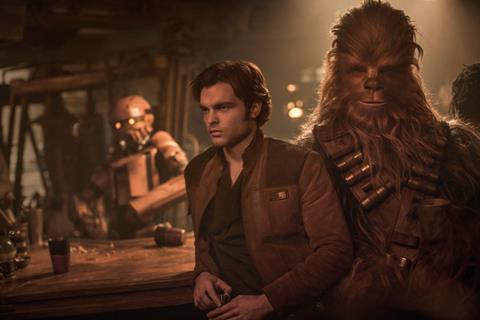 While the numbers weren’t expected to measure up to main franchise entries The Force Awakens and The Last Jedi, which set multiple box office records in their respective runs, the comparison between Solo and Rogue One will make disappointing reading for Disney.

Considering the enduring popularity of the character Han Solo from the original Star Wars films, and the success of Rogue One and the other recent Star Wars titles in the UK, the numbers for Solo will call for the studio to reflect on its approach to the franchise in general.

International figures for Solo were also underwhelming – its $148m global bow puts it way off the franchise pace, and its US and China figures are also poor.

The release date has been questioned, with Solo appearing less than six months after previous Star Wars entry The Last Jedi, leading to many cite possible franchise fatigue. The film’s troubled production, which saw original directors Phil Lord and Christopher Miller fired mid-shoot due to “creative differences”, and Ron Howard hired to steer the project to fruition, also left a cloud over its release.

Avengers: Infinity War is now on a superb £66.2m after adding £1.2m from the three-day weekend, its fifth weekend on release, and a further £450,000 on the bank holiday.

In its second week, Deadpool 2 is now up to £21.8m after adding £4.9m over the four-day UK weekend. By comparison, Deadpool was up to £25.85m at the same point, meaning Fox’s sequel is tracking marginally behind the original, which maxed out at £38.1m.

Family comedy Show Dogs landed in fifth place in the UK on its opening weekend, posting a non-final £546,406 from 512 sites.

Feature animation The Breadwinner opened to £79,329 including previews. After the bank holiday, the film is up to £95,361.

The second release in Sky Cinema’s new day-and-date push, the Clive Owen-starring sci-fi Anon, has grossed £28,072 in the UK to date.