Other winners included Bodkin Ras, Land Of Mine and Embrace Of The Serpent. 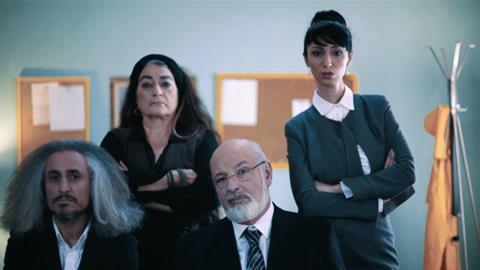 The film, which received its world premiere at IFFR, is a comedy about an Iranian writer who pursues an ambitious goal of bringing together Metallica and Kabul Dreams, Afghanistan’s first rock band. It marks the second feature of Jalali, whose Frontier Blues debuted at Locarno in 2009.

The jury said it had awarded the prize to Radio Dreams “for its subtle and humorous reflection on displacement and alienation of a group of misfits in a foreign culture.” [Click here for Babak Jalali interview]

In addition, a special jury award worth €10,000 was presented to La última tierra by Pablo Lamar, “for exceptional artistic achievement in sound design”. [Click here for interview]

The winners were announced at the IFFR 2016 Awards Ceremony, held at the festival’s main venue, de Doelen.

The FIPRESCI Award, given to the filmmaker of the best film in IFFR’s Bright Future strand, went to Kaweh Modiri for Bodkin Ras.

The FIPRESCI jury said: “Bodkin Ras throws an actor - portraying a mysterious foreigner - into the real environment of a small Scottish town. This fascinating hybrid of documentary and fiction is filled with unforgettable characters, a strong sense of place and an urgency that turns the experiment into a thrilling and humanistic film.”

The Warsteiner Audience Award went to Land of Mine by Martin Zandvliet, including a cash prize of €10,000. Set in the immediate aftermath of the Second World War, it centres on a young group of German POWs, who are now forced to dig up 2 million landmines with their hands.

Land of Mine also won the MovieZone Award, chosen by the young people’s MovieZone jury from EYE, which described the feature as: “A nerve-racking film which will keep you in its grip from beginning to end. While living in constant fear of death, small acts of tenderness and humanity steers the film into an emotional direction. The cast’s small but intense acting will leave you watching with a lump in your throat.”

The Dioraphte Award, which goes to the Hubert Bals Fund-supported film receiving the highest votes from the festival audience, was won by Colombia’s Embrace of the Serpent (El abrazo de la serpiente) by Ciro Guerra. The award includes a cash prize of €10,000.

The VPRO Big Screen Award went to Les ogres by Léa Fehner. The competition, consisting of eight films that had their international premieres at IFFR, was judged by a jury of audience members, who decided which film will assisted in distribution in the Netherlands. The award is worth €30,000.

The jury said: “The film showed us a very dynamic interaction between the remarkable characters, they interacted very passionately and very pure, as if they had no boundaries; with all its mostly humorous consequences. The film almost invites and warns you at the same time to really feel and to live full of passion. The film makes a very powerful appearance and it kept us intrigued until the end. We enjoyed its energetic filmic qualities and joyful music. The film is an ode to theatre and to its people who seem to belong nowhere else.”

The KNF Award, which goes a Dutch production or a Dutch co-production with a world premiere at IFFR, went to The Perception (De waarneming) by Frank Scheffer.

The NETPAC Award for the best Asian feature film screening in official selection went to The Plague At The Karatas Village by Kazakh director Adilkhan Yerzhanov.

The jury described the feature as “a film that is highly original in its cinematic form, while treating topics that are specific to the director’s country but universal at the same time. A story of corruption, the abuse of power and inertia are given an absurdist, Brechtian treatment. The director creates a totally unique universe, somewhere between Ionesco, Kafka and David Lynch.

The inaugural Bright Future Award was taken home by Melisa Liebenthal for Las lindas. The award consists of €10,000, to be spent on the development of the winner’s next film project. Filmmakers presenting the international or world premiere of their first feature length were eligible.

Announcing the awards, new festival director Bero Beyer said: “IFFR 2016 has been an edition with many inspiring, thought-provoking and engaging cinematic achievements from all over the world. I am grateful and excited the selection really seemed to resonate with both industry guests and audience.

“On behalf of IFFR I would like to congratulate the winners and all the films and projects that were part of the official selection this year. Thank you to the filmmakers for creating such wonderful films and allowing us to be part of your journey.”