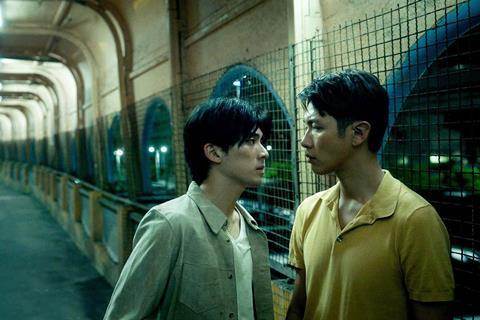 A fencing thriller, choir tale and LGBTQ+ drama are among Taiwanese titles in this year’s festival and market.

Dir. CB Yi
Playing in Un Certain Regard, China-born, Austria-based Yi’s Cannes debut is a filmed-in-Taiwan LGBTQ+ drama about a young man working as a rent boy and torn between traditional values and rampant capitalism. The cast includes Kai Ko (You Are The Apple Of My Eye), Chloe Maayan (Three Husbands) and JC Lin. The project was backed by Arte France Cinema, Taipei Film Commission and La Cie Cinematographique and supported by the Austrian National Film Fund and Taiwan’s Ministry of Culture. Yi studied directing with Michael Haneke and photography with Christian Berger at the Vienna Film Academy. Contact: Totem Films

Days Before The Millennium

Dir. Chang Teng-Yuan
Set to premiere at Taipei Film Festival in September, Chang’s debut feature explores the struggle of immigrants in Taiwan through the eyes of two Vietnamese women from different generations. Chang’s interest in new immigrants developed over many years through his reporting for an NGO. He has also curated art exhibitions and forums on the subject in Taipei. The project won the Taiwanese Ministry of Culture’s Excellent Screenplay Award in 2016 and the Golden Horse Film Project Promotion’s MAN-JIA memorial award in 2019. Contact: ifilm

Listen Before You Sing

Dir. Yang Chih-Lin
Yang’s debut narrative feature is about a gym teacher who leads a group of Bunun aboriginal children to join the national choir contest in order to save their school from being demolished. Yang previously directed documentary Sing It based on the same subject in 2009. Listen Before You Sing was recently released in Taiwan through Warner Bros, grossing $2.6m as of May 28, until the pandemic shut down cinemas. It will be the joint opening film of Hong Kong Kids International Film Festival in mid-July, with a Hong Kong theatrical release scheduled for Q3 2021. Umin Boya and Ella Chen star. Contact: Neverland Entertainment

No Game No Life

Dir. Lai Kuo-An
Following his debut feature A Fish Out Of Water, which premiered in Toronto and played San Sebastian’s New Directors competition in 2017, Lai continues to focus on family dynamics in his second film. It revolves around a seemingly happy family of three who live in a borrowed mansion, but the parents’ marriage is on the rocks and a long-deserted amusement park seems to be the only way out for the teenage daughter. Currently in post-production, the film stars Peggy Tseng and James Wan. Contact: Swallow Wings

Dir. Nelicia Low
Singapore filmmaker Low’s debut feature is the first Taiwan-Singapore-Poland co-production, and has support from more than 10 funding bodies including in Thailand and the Netherlands. In pre-production, the Taiwan-set fencing thriller explores unconditional love through the relationship between two troubled brothers and their mother. Backers include Potocol, Flash Forward Entertainment and Harine Films. The story is drawn partly from the personal experience of Low, who was a national fencer. The filmmaker’s 2015 short Freeze, about her relationship with her autistic brother, premiered in Clermont-Ferrand before travelling to more than 70 festivals. Contact: Flash Forward Entertainment