Representatives from the French city visited London to explore opportunities and innovative partnerships in the UK. 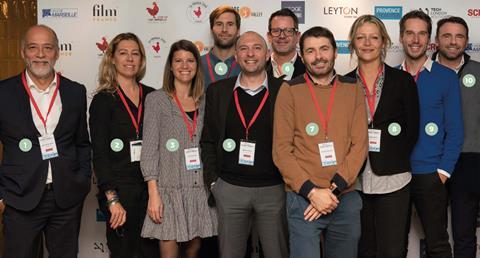 Marseille is the French cultural metropolis that marries the vitality of Europe with the dynamism of Africa, creating a unique appeal for international filmmakers and producers. The city boasts 300 days of sunshine a year, a heady mix of cultures and a film and multi­media talent pool of more than 5,000 professionals.

The 2016 TV series Marseille, starring Gérard Depardieu, was produced by France’s Federation Entertainment for Netflix and filmed on location for two seasons in the French city. Netflix chief content officer Ted Sarandos describes Marseille as “one of the world’s most vibrant and fascinating cities”.

1. Jean Michel Albert, CEO, Darklight
Darklight describes itself as a ‘creative boutique’, producing features and drama series. It is on the lookout for UK production partnerships.

6. Laurent Dumeau, CEO UK, Trace TV
Trace TV specialises in urban and Afro-urban celebrity news, along with music and lifestyle segments. It is launching a talent academy in Marseille.

8. Sandra Niellini, COO, MCES E-Sport
MCES E-Sport, whose e-sports teams are the current vice world champions of Fortnite, has secured seed investment of $2m (€1.8m) to set up e-sports academies in Europe and the US.