Locarno 2020: How Open Doors will support its filmmakers throughout the year 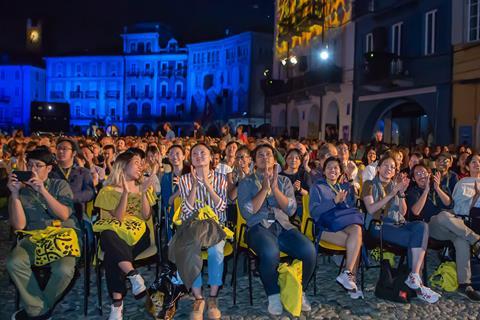 An Open Doors screening in Locarno

Filipino producer Alemberg Ang attended Locarno’s Open Doors in 2019 with Petersen Vargas’s buzzy youth drama Some Nights I Feel Like Walking, which has since been invited to the Cannes Cinéfondation’s l’Atelier and Hong Kong-Asia Film Financing Forum platforms.

His relationship with Open Doors did not end after he boarded his flight home to the Philippines, however, thanks to the programme’s new initiative extending its activities beyond its onsite meeting to offer year-round support.

Ang, who produces under the banner of VY/AC Production, was one of the first professionals to tap into the service, seeking advice for another project, Joseph Mangat’s creative documentary Holy Craft, which recently won the $10,000 Docs-in-Progress award at Cannes’ Marché du Film in June.

“For an independent producer like me who is trying to eke out a spot for my films in the world of international co-productions, they have introduced me to a good number of decision makers,” says Ang.

Zsuzsi Bánkuti, former head of acquisitions at German sales house The Match Factory, is overseeing the initiative having joined the Open Doors team in April in the newly created role of community coordinator.

“Open Doors has been working so well with the selected projects and producers, but within that seven-day workshop of course they can only reach a limited number of people,” explains Bánkuti. “With the other year-round work we can go so much wider, but we are also still there for the participants of the Open Doors activities and the alumni.”

In its first iteration, these year-round services are being made available to cinema professionals hailing from the 16 territories covered by the current Open Doors three-year cycle, focused on Southeast Asia and Mongolia, as well as the previous South Asia focus. Few of these countries offer state funding for film, international-standard film schools or professional events.

Bánkuti suggests there are potentially hundreds of directors, producers and writers who could benefit from the four prongs of the year-round offering, comprising the Open Doors ToolBox online platform, an advice hotline, a dedicated consultancy service and an annual regional forum in one of the focus territories.

She estimates the initiative will bring her into direct contact with at least 200 filmmakers a year, some just to answer a quick question, and others for deeper consultation. Many hundreds more are invited to use Open Doors’ online resources.

The ToolBox platform went live in June and already provides information about common concerns such as festival strategies, recommendations of books about the film industry and a list of development workshops.

The platform also features expert talks from past Locarno editions, and bespoke masterclasses will be added in the coming months.

An online discussion forum for filmmakers and producers to talk to each other launches this autumn, and Bánkuti hopes it will encourage professionals to “build with each other, foster each other”.

Bánkuti describes the hotline as “a mini-consultancy” rather than a classic hotline with 24-hour advice. Professionals can email simple questions, which she and Kiskanc respond to on a day-to-day basis via email or a phone call. These replies can cover anything from providing a contact number, to advice on festivals, or giving script notes.

The full consultancy is a more in-depth service offered to around 25 projects a year. There will be three calls annually, with the next one scheduled for mid-September. An expert international selection committee picks projects on the basis of which ones they think will benefit most from the help.

The selected teams are paired with industry experts corresponding to the project’s needs, whether that be script consultancy or advice on editing, co-production, distribution strategies, and legal or contract issues.

“It is a very focused programme,” says Bánkuti, noting the mentors have at least four hours of meetings with each film team. The consultants can hail from anywhere, but those based in the West must have experience in dealing with South Asia or Southeast Asia and be sensitive to the cultural values and inherent voices of the region.

“It is a huge responsibility to protect their voice, you don’t want to change it to a Western voice… we don’t want to be these ‘Western saviours’,” she says.

The fourth branch of the initiative, the annual regional forum, was supposed to hold an inaugural edition somewhere in South Asia later this year but this is likely to be put on hold until 2021 due to the Covid-19 pandemic.

“We had already done a lot of research about where to host the first forum, but now everything is changing,” says Bánkuti. The idea is to get filmmakers and producers together in a convenient location in their own region to cut down on travel costs and visas as well as to foster regional collaboration. Sessions with local and global experts will address big-picture concerns as well as practical skills.

“The forum will be a place where they can all meet each other and learn from each other,” she adds.

So far, professionals who have plugged into the initiative have ended up using a range of its services. Ang, for example, wrote to the hotline for advice on Holy Craft in the first instance and has now applied for the consultancy. “Since we recently decided to recut, we’re hoping the consultancy can help us find the best strategy in approaching the re-edit,” he says.

Writer and producer Youngjeong Oh has worked with the hotline and the consultancy as she develops The Maw Naing’s film The Women (Ma), which is a drama set in Myanmar about a girl who moves to Yangon to overcome her past traumas but finds herself in the middle of a factory strike led by women. The hotline, she says, reassured her that “a good mentor is always ready to share various advice with us, and stand closely with us”.

Bangladeshi director Farid Ahmad used the hotline to get advice on how to improve his application to the consultancy for his feature creative documentary Waiting For Winter, which is in development.

Having secured a consultancy slot, he welcomes the chance to learn from his mentor, editor Sylvie Gadmer, and is getting advice for the structure of his narrative. He appreciates her holistic approach as well: “She is not only guiding my current project, she also watched my earlier films and shared her opinion about the shortcomings of my storytelling.”

All of these services are free to the filmmakers and producers, thanks to backing from the Swiss Agency for Development and Cooperation (SDC), part of the Federal Department of Foreign Affairs.

“It’s such an important initiative. I’m totally amazed that a project like this can happen,” says Germany-based Bánkuti. She believes South Asia and Southeast Asia’s emerging cinema scenes hold the same promise as those of Latin American cinema, which have flourished in the past two decades.

“There is a lot of potential like that in Asia. It’s an interesting region,” she says. “I sometimes read a script or watch a short and I’m speechless, they are so talented.”

One issue holding back the region’s filmmakers is the dearth of creative producers in the region, Bánkuti says. It is something she is hoping to tackle in unison with the Open Doors Lab component.

In the meantime, she believes that even offering support on relatively simple tasks such as writing a synopsis in English or putting together a funding application can have a big impact.

“We hope to find interesting filmmakers who have limited access,” she says. “We want to help the new generation of film professionals by giving them this kind of knowledge, something they can share with the generation after them, in order to create a sustainable network.”