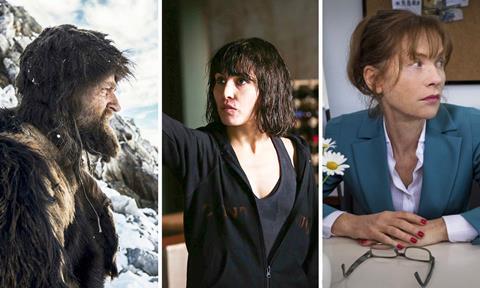 Celebrating 70 years, Locarno Festival has reason to be proud, not just for being able to thrive across seven decades but for establishing a strong identity built on principles of bold programming, high artistic standards and forward thinking.

And all this in one of the most picturesque lakeside towns Switzerland has to offer. Who could ask for more? Screen staff picked 10 of the most interesting films to play at this year’s festival.

This dystopian sci-fi thriller, also known as Seven Sisters, boasts a cast including Noomi Rapace, Willem Dafoe and Glenn Close. It follows seven siblings struggling to survive in a society that allows only one child per family. Close also starred in Locarno’s 2016 opener The Girl With All The Gifts.

For his third feature, German director Felix Randau imagines the life and final days of Otzi, a man who lived in the 31st century BC and whose perfectly preserved mummified body was discovered in the Otztal Alps in 1991.

The Song Of Scorpions

After winning, among others, the Network for the Promotion of Asian Cinema prize at Toronto in 2013 for Qissa: The Tale Of A Lonely Ghost, director Anup Singh reunites with that film’s star, Irrfan Khan, for a tale of love and revenge set in the Thar desert of Rajasthan.

Starring French actress Bérénice Bejo (The Artist), cinematographer-turned-director Jan Zabeil’s latest sees a man, his new girlfriend and her young son struggle to enjoy a holiday together in the Italian Dolomites. Zabeil won the best new director prize at San Sebastian in 2011 for his debut The River Used To Be A Man.

Palestinian director Annemarie Jacir’s 2008 debut Salt Of This Sea played in Un Certain Regard at Cannes. Her latest work, Duty (Wajib), is a dark comedy about an estranged father and son trying to reconnect. The film received a Tribeca All Access alumni grant in 2015.

For his directorial debut, filmmaker Xu Bing weaves together real-life Chinese CCTV footage to create a fictional drama about a man searching for his lost love.

Isabelle Huppert follows her Oscar-nominated and Golden Globe-winning turn in Elle with this role as a physics teacher who undergoes a major personality shift. Romain Duris also stars.

The feature debut of Icelandic shorts filmmaker Hlynur Palmason, Winter Brothers is the story of a violent feud that erupts between two brothers, and stars Lars Mikkelsen, who has boosted his international profile playing Russian president Viktor Petrov in Net­flix’s House Of Cards.