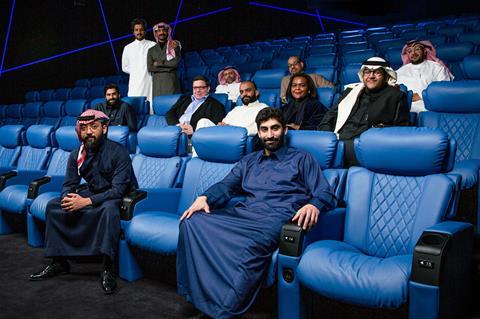 Burgeoning Saudi exhibition chain Muvi Cinemas has taken an undisclosed stake in compatriot entertainment group Telfaz11, as part of a strategic partnership aimed at boosting the creation of local content.

Riyadh-based Telfaz11 was at the forefront of Saudi Arabia’s YouTube youth content revolution in the early 2010s and is now a major production and content financing group. In November, it struck a deal with Netflix to produce eight features with local filmmakers.

Founded in 2019, Muvi Cinemas is one of the first home-grown exhibition chains to take off in Saudi Arabia since the lifting of the country’s cinema ban at the end of 2017.

It operates in 10 locations in six cities with a total of 103 screens and has ambitious plans to expand its capacity to more than 610 screens by 2025. It recently created distribution label Front Row Arabia, in partnership with Dubai-based distributor Front Row.

One of the first initiatives of the partnership will be the creation of a film fund to finance Telfaz11-produced feature films for release in Saudi cinemas.

Marketing collaboration will be another key component of the arrangement, with the companies intending to collaborate on each other’s social media and digital platforms in a vertical marketing alliance. Telfaz11 will offer Muvi access to its creative marketing services, as well as to its network of 28 million subscribers and followers, to support Muvi’s aggressive expansion in the kingdom.

“We are extremely excited with this strategic partnership with Telfaz11. The need for a strong local-language film market with theatrical window has never been stronger with the annual box office projected to exceed $1bn annually by 2030,” said Muvi Cinemas CEO Sultan Alhokair.

“Studios such as Telfaz11 are strongly placed to be market leaders given that Saudi Arabia’s cinema industry is similar to those of France, Italy and Germany, insofar as local-language content accounts for over 40% of annual box-office revenue.”

Alhokair added that Telfaz11’s expertise in creative content creation and audience growth would also help the Muvi brand as it expanded its network.

“Saudi Arabia is making tremendous advancements within the entertainment community, both with what we produce and how we reach audiences,” said Telfaz11 CEO Alaa Fadan.

“It has long been our goal to ensure all Saudis get to experience the magic of movies in theatres, and this deal with our friends at Muvi only furthers Telfaz11’s mandate to have a hand in our country’s cultural growth in the film and media business.”