A tale of literary lovers which never connects 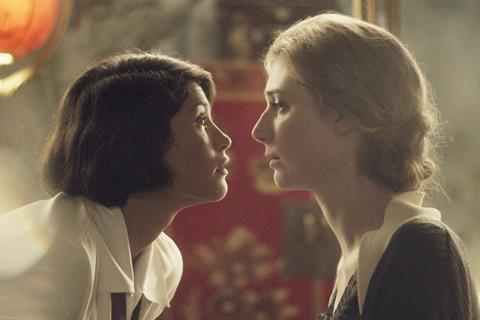 In this mannered literary period piece, the story of the love affair between Virginia Woolf and Vita Sackville-West is too hampered by tonal and pacing issues to ever ignite. Chanya Button’s account of the romance between the two women takes as its central spine the letters that they exchanged, but augments them with too much in the way of soft-focus longing and wistful sighs in the sound design.

The social whirl of twenties literary London plays out to a kind of trance/EDM-infused anthem which is so glaringly wrong, it undermines any credibility the film might have otherwise mustered

Gemma Arterton deploys the full force of her seductive charm in the role of the poet, author and scandalous society beauty Vita. And it’s her presence in the cast which will provide the film with its main marketing hook. But even Arterton at smouldering full wattage can do little to hold together a picture in which the chemistry between the two leads is non-existent and many of the directorial choices are decidedly odd. A tighter edit and a different score might improve the film’s chances of connecting with audiences going forward from the film’s World Premiere in Toronto.

Of the two central characters here, it’s Vita who comes across as the more complex, full-blooded individual. She is, as her long-suffering husband Sir Harold Nicolson (Rupert Penry-Jones) acknowledges, someone who likes to have her cake and eat it. “And there are so many cakes, Vita”. Equipped with a fabulous wardrobe – costume is the one department which rarely puts a foot wrong – and a string of discarded lovers who waft behind her like the remnants of her expensive scent, she is a purring, pleasure-seeking force of destruction.

But even Vita is upstaged in the giddy, atmosphere-setting early scenes in 1920s London by the incongruous music choices. The social whirl of twenties literary London plays out to a kind of trance/EDM-infused anthem which is so glaringly wrong, it undermines any credibility the film might have otherwise mustered.

Vita announces her intention of getting to know Virginia with the same emphatic taste for drama that informs her clothing choices (animal prints and elaborate hats feature heavily). “She is wickedly brilliant! I must know her.” Sir Harold, sensing trouble, warns Virginia seems “rather hard work”. He’s not wrong. As portrayed by Elizabeth Debicki, Woolf is so physically and emotionally awkward, she is almost painful to watch. She communicates in brusque, gnomic declarations. All long, straight lines and sharp angles, Debicki’s Virginia moves with the alien jerkiness of a long-legged wading bird picking its way across a swamp. For all the unblinking stares which pass between the women, whose eyes lock almost from the moment they meet, there is little to suggest much of a connection between the two.

Instead, the film attempts to manufacture chemistry by regurgitating chunks of the letters that Vita and Virginia wrote to each other, with each actress gazing into a vaseline-smeared lens, breathily reciting words which are picked out on the screen for emphasis. The sound design is overloaded with passionate pants and heartsore sighs which have little bearing to what we are seeing on screen. Visually, the decisions are equally jarring: there’s a murky, muddy quality to much of the cinematography. And Woolf’s mental health issues are represented by an onslaught of CGI crows. Like Virginia herself, it’s all rather arduous.