From addressing sexual harassment to the challenge of platforms and China, Europa International board members Susan Wendt, Jean-Christophe Simon and Daniela Elstner talk about the organisation’s growing remit. 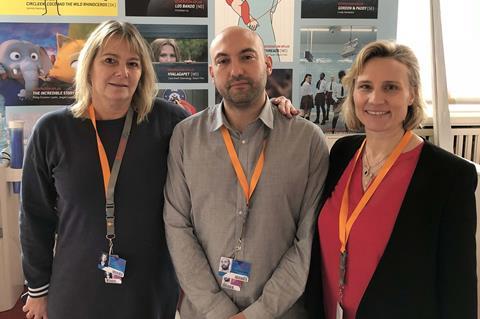 The atmosphere among Europe’s sales agents may be competitive along the hallways of the Martin-Gropius-Bau this EFM, but behind the scenes they are increasingly coming together in the face of the seismic developments affecting their business. One sign of this is the rising membership of Europa International, which has doubled in number to 48 companies since its formation during the 2011 Berlinale.

“It’s an agitated but exciting environment for sales,” comments Films Boutique CEO Jean-Christophe Simon, who took over as president of the European sales agent network last November. “There are a lot of changes taking place in distribution. There is the question of the platforms, which are changing our work and sometimes causing us to come on board projects much earlier; and there is China, which is becoming an increasingly big market for us. These are our main focus.”

The organisation is also involved in discussions over the European Union’s future strategy for the cultural and audiovisual sectors, with the current $1.8bn Creative Europe programme due to end in 2020. One of the body’s triumphs has been securing more Creative Europe-backed support for European sales agents, but it is unclear in what form this will continue post-2020.

“When we began, no one was lobbying for us. Creative Europe funding for sales agents was very low,” says Susan Wendt, TrustNordisk sales director and Europa International vice president. “We’ve managed to raise the lump sum for the sales agents, and open up discussions on what the future holds. It’s a world that is changing all the time. What was good in terms of funding yesterday might not be good tomorrow.”

These developments, as well as the topical issue of sexual harassment in the film industry (see box), were all on the agenda of Europa International’s general assembly at the EFM this week. But it’s not all talk. The body has also spearheaded a dozen practical projects since its creation, ranging from simple initiatives such as devising a universal submission form for festivals to cut down on paperwork, to the launch in January of Tales of Europe during the annual Art House Convergence meeting in Utah.

Under the latter initiative, Europa International has teamed up with Europa Cinemas, the network of European exhibitors, and France-based content delivery platform EclairPlay to make a package

of 10 recent European films with festival histories available to arthouse cinemas across the US. The line-up includes French director Gael Morel’s Catch The Wind, Polish filmmaker Jan P Matuszynski’s The Last Family and Men Don’t Cry by Bosnia’s Alen Drljevic. “There’s a lot of interest from arthouse cinemas in the US for European films but it can be complicated for them to access them, either because they don’t know the sales companies or because of the expense of the DCP,” explains Simon.

Doc & Film International CEO Daniela Elstner, who is its treasurer, adds that the long-term goal is to foster new audiences for European cinema in the US. She highlights the fact Europa Inter­national has paid close attention to the US ever since its creation. “We’ve always tried to be one step ahead,” she explains. “We were discussing VoD and SVoD long before big platforms came along. As the US was where this took off first, it was only natural to invite US speakers to talk about their experiences.”

One of the US attendees in the early days was Ted Hope, who moderated the first conference, although he has not been back since being appointed head of film production at Amazon Studios.

“We have regular informal conversations with the platforms,” says Simon. “We don’t see them as the enemy. They are challenging us, asking us to change and we’re happy to — it’s just another way of working.”