Australian film-maker Justin Kurzel explains to Andreas Wiseman why following his chilling debut Snowtown with Shakespeare’s Scottish tragedy Macbeth worked out to be the ‘perfect storm’. 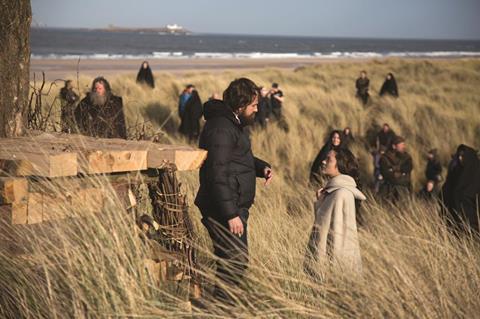 Bringing freshness to a Shakespeare classic is always a daunting task. But coming off his explosive 2011 Critics’ Week debut Snowtown and aching to work with Michael Fassbender, director Justin Kurzel is bang on the money when he describes Cannes Competition entry Macbeth as “a perfect storm”.

Shot in Scotland on a budget between $15m-$20m, Kurzel’s follow-up to Snowtown brings new verve to the story of the fearless Scottish warrior Macbeth who is ultimately brought low by ambition and desire. The highly anticipated adaptation saw The King’s Speech and Top Of The Lake producers See-Saw Films put together in-demand Australian director Kurzel with on-screen luminaries Fassbender and Marion Cotillard in a bold re-imagining of Shakespeare’s dark play.

Add to the mix industry powerhouses StudioCanal, The Weinstein Company and Film4, in addition to behind-the-scenes talent including DoP Adam Arkapaw (Animal Kingdom), production designer Fiona Crombie (Top Of The Lake) and costume designer Jacqueline Durran (Atonement), and it’s easy to see why the film is generating so much pre-Cannes buzz.

Screen met up with Kurzel in London two weeks before the festival to talk about working with his red-hot lead actors, his penchant for darkness and summoning spirits on set.

Congratulations on Macbeth’s acceptance into Cannes. It’s your first time in Competition and only your second film, making you two for two in showing at the festival. How did the project come about?

I was on another film that I had spent probably 18 months of my life doing, which for various reasons didn’t happen. Towards the end of that period, Iain Canning [of See-Saw Films] approached me about Macbeth. I was a huge fan of Michael. There’s something generational about him - a masculinity and a vulnerability, kind of like a Paul Newman or a De Niro.

So that’s kind of how it came about; it was a real desire to work with Michael. Thankfully, Iain brought us the perfect storm in the shape of Macbeth.

What convinced you to take the plunge on this project rather than stick with the one you had nurtured for 18 months?

Coming off a social-realist piece like Snowtown, I would never have thought I would direct a Shakespeare play but it just became more and more fascinating, and more scary. This project connected with many aspects of the psychology of Snowtown. The idea of being seduced by evil was still pretty fresh in me. I find those figures that dance with evil really fascinating.

I think Macbeth has always been a study of ambition and power, and I thought there would be something really interesting in seeing how that could arise from trauma and grief, a sense of loss - of a child, perhaps - or through a sense of post-traumatic stress after all the battles he had been through.

I wanted to bring an intimacy to the overt ideas of the play. Macbeth, as a warrior, was a product of an incredibly brutal landscape and I was interested in how that landscape and other external factors influence ambition.

Violence and unease pervade Snowtown and Macbeth. As a film-maker, do you feel most comfortable in that area?

The landscape and communities of Australia definitely have an effect on you. It can be a very alienating and strange place. Snowtown is definitely about that: disparate souls. In a weird way it is like a Western. As is Macbeth.

The characters are defined, especially through the witches, by the stories and the curses of the land. And the characters are fighting over land. So I think the way environment either puts a curse on us or watches us, or reminds us that we are small among it, is something that I feel very close to.

Also, I do like seeing characters dismantled. There is something inherently watchable about characters struggling to make sense of their actions and justify them.

Shakespeare is the ultimate exponent of that kind of struggle.

Yes, a big part of Macbeth is about family. We really looked at yearning for that sense of community and family in both characters [Macbeth and Lady Macbeth]. That’s a really powerful thing, something we all want - to belong.

We got excited about that dilemma within the characters of yearning for community but also their destruction. Macbeth goes about destroying families and the big thing is that he doesn’t have one.

Very loaded. And strange. You know the whole ‘Don’t say Macbeth’ thing [theatrical superstition where actors avoid saying the play’s name inside a theatre]? Well, so many things started to go wrong during the production.

You could just feel stuff was hovering over us and that’s strange because you’re determined not to get sucked into it. But it just does. When Lady Macbeth is summoning the witches, it is kind of like you’re actively summoning spirits. It’s a strange dance.

Did you have to go through a process of adjustment working with such experienced lead actors?

Yes and no. The idea of working with Michael and Marion with their body of work was very intimidating. As actors, their precision is amazing. Michael had read the script more than 200 times before our first read-through.

It’s like having a finely tuned Ferrari that allows you to direct by fractions. It was a big learning curve for me. In the end I think what bonded us was the fear of it all. There was a mountain over us - Michael playing Macbeth, Marion playing Lady Macbeth as a French woman, and me being an Australian coming to England and making a film of one of the most famous British plays. But that pressure seemed to really galvanise us.

Right from the beginning we made a pact to just be there for each other and be very honest and just trust, step-by-step, what we were doing.

The shoot must have been hugely intense for both of them. To what extent did Michael and Marion go ‘method’?

What was the biggest challenge for you?

The weather and landscape was a major factor. Macduff’s ‘pretty chickens’ verse [when he learns of his family’s murder], for example, was delivered on top of a mountain, with wind gusting across Sean Harris’s face. Those opportunities made it very cinematic but also gave something extra to the verse. However, it was also really fucking hard, just technically, trying to deliver the intimacy of the verse and for our mics to pick it all up.

Among the returning Snowtown crew, Adam Arkapaw was DoP and your brother Jed scored the film. Did working with regular collaborators ease any worries you had?

Yes, it felt fantastic having a bunch of Aussies around me and people that I’ve worked with before. It was a really great combination with the UK crew. In a sense it kind of felt like we were making our first film again.

It was really nice to be able to offload any insecurity through my Snowtown team.

How does it feel to be in Competition at Cannes, in what has been hailed as a fresh and somewhat atypical year?

For a director, it’s the mecca. My student film, Blue Tongue, played in Cannes in 2005 [in Critics’ Week]. Six years later, Snowtown also played in Critics’ Week. The fact I’m now in Competition is an incredible privilege.

It’s really exciting to be next to someone like Yorgos [Lanthimos, director of The Lobster] who I deeply admire, and to be part of a group of new film-makers who are showing in Competition. When I was there with Snowtown, I could kind of sense there were some strong and interesting new voices coming through.

Is an adaptation of video-game Assassin’s Creed, also starring Fassbender and Cotillard, next?

Yes, we’re shooting in August. It’s exciting because it’s a completely different genre. But it deals with really big and interesting themes, which the game kind of taps into.

I’m fortunate I get the opportunity to work with these guys again but in a completely different way.