'Zootopia': the painstaking journey behind a billion dollar hit

The filmmakers behind Disney’s Zootopia went to extraordinary lengths to create the animation’s lifelike world. 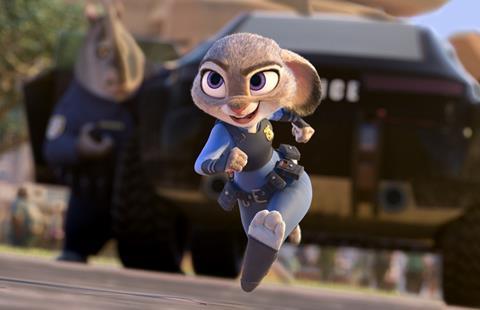 It took a village to build a city in Zootopia, one of Disney’s most ambitious animated features in years and one that is expected to figure prominently in the awards race.

Hundreds of animators, effects specialists, lighting experts - even a gaggle of mathematicians, architects and a world authority on bias - worked long and hard to make the sprawling metropolis setting as believable and detailed as they could.

The result is a colourful, $1.24bn-grossing (£1bn) worldwide blockbuster about a tough-as-nails rookie police bunny out to solve a mystery, which features six distinct ecosystems populated by more than 60 animal species, and a profound, hopeful narrative.

It began five years ago, explain directors Byron Howard and Rich Moore, in a pitch to Pixar and Walt Disney Animation Studios chief creative officer John Lasseter about an all-animal project. Although Howard had directed Bolt, and Moore helmed Wreck-It Ralph, this was an entirely different prospect - and Disney had not made an animation like this in a long time.

“We’d done movies with some animals in them but as far as an all-animal movie, Robin Hood was one of the last ones way, way back when,” says Howard, referencing a big influence in his career. “John got very excited about it and we said if we were going to do this it would have to be completely different from anything you’d seen before.”

“We said, ‘secret life of pets’,” says Moore with a laugh. “What do they do when the owners leave? Turns out someone was doing that. We thought, ‘A panda - he does kung-fu, how about that?’”

Joking aside, Moore explains how the early concept for the project was a buddy movie predicated on a friendship of sorts between predator and prey.

Lasseter gave his blessing for what would become 18 months of research dedicated solely to animals. The film-makers consulted experts from all over the globe, visited Disney’s Animal Kingdom at Walt Disney World and took trips to San Diego Zoo Safari Park in southern California.

To figure out how to bring Zootopia’s many species together in one thriving cluster, the team also flew to Nairobi, Kenya, to study cohabitation.

“As we started working on this predator-prey idea that was there from the very beginning about two groups that don’t see eye-to-eye, that led us very quickly to this idea that the movie could be about bias,” says Howard.

At first the film-makers had wanted their main character to be Nick Wilde, the fox voiced by Jason Bateman. They soon realised, however, that the young rabbit Judy Hopps, voiced by Ginnifer Goodwin, would make a far juicier protagonist.

“Rather than [focusing on] Nick, a member of society who’s been oppressed his whole life, what if we told a story of bias in a more subtle way from [the perspective of] an outsider?” says Moore. “Someone who has a very bright, optimistic view of this world, who comes here with the best of intentions.

“Through her job as a police officer working this procedural case, she starts to chip away at the underlying discrimination that exists between predator and prey and, not only that, realises that it’s in her too; that she has this fear of the other that she thought maybe was part of her parents’ generation.

“Lo and behold, what seems like a story about following your dreams is really a deep maturation story of this young rabbit trying to make her way in the world. That’s when we felt this had some meat to it and the story became much more exciting, and we’re not just telling a talking animals story - we’re making a Disney film and Disney films take time to make.”

The team consulted bias expert and World Trust founder Dr Shakti Butler. “In doing research into what makes bias and discrimination a problem in society, we learnt more about ourselves over a period of years,” says Howard.

“In the beginning, we thought, ‘Well, people just need to get along and get past it.’ But we did more research and [Butler] worked with us throughout the development of the film and really taught us that bias is so much more subtle than you think it is.

“Even our main character Judy Hopps, who is this Capra-esque character who believes in the world, realises that she has these fearful parts of herself that she’s carried around since she was a kid.

“But the fact that she steps up and owns that in a very emotional way in the film is one of the reasons people relate to it. She is a flawed character, as we all are. We all make mistakes and see that as a bonding part of our humanity.”

The team took care not to turn Zootopia into a sermon and, encouraged by early test screenings, knew they were on the right track.

“At its core it was about something profound,” says Moore. “We were discussing Aesop’s Fables or George Orwell’s Animal Farm. For some reason telling a story like this, about fear of the other, using proxy characters that are not human beings becomes an easier entry point than if [the protagonist] were a human, because then the audience would say, ‘Well that person looks different from me so I only invest a portion of myself in this.’”

An exceptional crew of collaborators - one layout artist had been an architect on an opera house in mainland China - worked long hours so everything in Zootopia would frame the relationship between Judy and Nick.

“We put a lot of time into the depth of those characters so they could really figure out that, underneath the surface, they’re very much alike,” says Howard. “We tried to put them at a disadvantage size-wise in the world. We made them small in a world full of animals that could potentially hurt them or kill them.”

Living in the city

During the development phase, while the film-makers, including heads of story Josie Trinidad and Jim Reardon, finessed the plot, art director of environments Matthias Lechner and production designer David Goetz created the city. “It’s not just a pretend thing,” Howard says of the virtual world of Zootopia. “It’s a real living city that actually has to function, and that makes us want to revisit it.”

The modelling team built everything that appears on screen; cars, blades of grass, buildings, environments and characters. It was a painstaking process. It took one year to turn a sketch of Nick into a digitised model that the animators could manipulate on virtual sets once production got underway.

“And during all that we’re having hundreds of recording sessions with talent,” says Howard. “We have the score and songwriting and vocal performances from the likes of Shakira. So we’re flying all over the place.”

“You’re developing these worlds,” says Moore, “and you get into the production phase and suddenly hundreds of animators are working on it with effects artists and layout artists, who are basically the cameramen of this virtual world.

“We’re there to shepherd it because they’re all way smarter than we are in their own worlds, so it’s about talking about what the vision could be and pushing to get it to where it ultimately needs to be.”

Zootopia producer Clark Spencer explains why the invention of new technology was necessary to create the film’s animal characters.

There are 64 species of animal in Zootopia, which meant one particular aspect of animation technology was due for an upgrade.

“Fur was a huge [challenge],” says producer Clark Spencer. “We studied the fur of the species under a microscope because it’s all completely different. We realised polar bear fur is actually clear, not white. It’s the way the light travels through it that makes it [seem] white, so that’s how we created polar bear fur. You go in and look at fox fur and it’s dark at the root and gets lighter as it gets to the tip, so when there’s wind in the film you see that Nick’s fur actually has a dark undertone to it.

“We had to create technology to make the fur,” continues Spencer. “Usually we use human hair as a proxy and human hair has the same property, so we had to create new shaders to create the look of these different furs, whether they were coarse, or wet or soft as on a mouse. It was a huge thing to embark upon but we wanted it to look fantastic.”