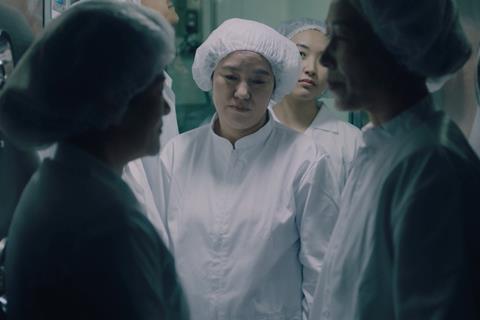 An unremarkable but not unhappy life is rocked to its core by the shame and mortification of a shared private video, in this delicately observed drama. Jeong-sun (Kim Geumsoon) works on the packing line of a food processing factory, a job which provides her with social support – she hikes and drinks with her co-workers at the weekend – as well as a wage. A cautious covert relationship with a new worker, Yeong-su (Cho Hyun-woo) seems to offer new hope for the future. But his betrayal, in sharing a video of Jeong-sun serenading him in her bra and knickers, is devastating, sending shockwaves through her place of work and wider community. Understated and intimate, this contemplative film focuses on the subtle details of Kim Geumsoon’s impressive performance.

The film, which won the top prize in Jeonju’s Korean competition is one of several films at this year’s festival to have been inspired by a notorious recent scandal: the Nth Room Case, which involved blackmail, cybersex trafficking and the spread of sexual videos. While the incident in this story is less overtly exploitative, the film does capture the destructive force of cyber-exposure and shaming, and as such should touch a nerve with domestic audiences. Further festival interest is possible and writer/director Jeong Ji-hye should figure on any lists of promising new East Asian female filmmaking talent. However, the film might struggle to assert itself in the over-crowded arthouse theatrical market.

The picture lays a solid foundation of mundane humanising details – the conversation between Jeong-sun and her adult daughter over what best to do with the latest batch of too-bitter kimchi, the workplace banter, the officious much younger boss who demands that the workers bow in unison to welcome a visiting dignitary. Jeong-sun snorts with derisive laughter at this request, a reaction which doesn’t endear her to her boss, who clearly prefers her younger female co-workers. With her daughter preparing to marry and embark on her own life, divorcee Jeong-sun is faced by the emptiness of middle age. Unassuming Yeong-su, new in town and clearly single, catches her eye, and the film’s deft cinematography picks up on every stolen glance at her co-worker. Their relationship, conducted in his grim little box of a motel room under cover of darkness, is a faltering thing but there is a genuine warmth there. The film’s score, a tentative piano motif, reflects the shyness and reserve between them.

One morning, in the blue light before dawn, Yeong-su calls for Jeong-sun in a rental car. His plan is to visit a local beauty spot before work. In companionable silence, they watch the dawn over a tranquil lake. But this serene, shared moment is spoiled when they are spotted arriving at work together and the workplace gossip machine fires up.

The reveal of Jeong-sun’s candid video and its aftermath is perhaps less successful than the carefully constructed portrait of a woman and her place in a community which comes before it, not least because Jeong-sun’s initial reaction is a state of mortified catatonia. Time slows down and she retreats to her bed, head buried in a pillow to block out the mocking whispers and laughter. For a while it seems as though the film, like the central character, has entered a state of paralysis. But then a cleansing burst of anger breaks through, with a terrific confrontation scene in which Jeong-sun weaponizes her own discomfort and embarrassment and turns it on her tormentors instead.