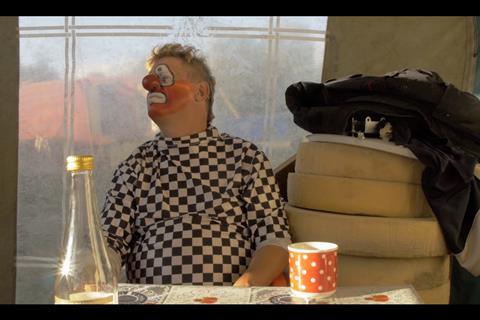 It’s hard to imagine what the circus folk at the forefront of Daria Slyusarenko’s film thought they would gain from letting the cameras into their gruelling, failing, constantly bickering lives, or indeed what they think of the result. There are plenty of warts-and-all documentaries, but aside from some ironic laughs this is mostly all warts, and not a particularly strong advertisement for the circus - possibly Slyusarenko’s intention.

At once comic and awful

Directing her first documentary, the Russian director can be commended for gaining access to some very personal moments and revealing what we’ve often assumed to be the tumult behind the scenes of circus life, the melancholy behind the clown’s painted smile. She presents a tradition in its dying breath, with evidence of animal cruelty that backs arguments against that tradition. At the same time, however, her narrow focus on just four individuals and what  bsometimes feel like cheap shots at their expense can limit the film’s efficacy and appeal.

As happy irony would have it, Joy is the name of this travelling circus, peddling its “engaging acts, extreme feats” on a rain-lashed tour of backwater towns, where audiences are for the most part tiny to non-existent. (We see it tour the Moscow, Kaluga and Tver regions.)  The audience first meets Marina and Alexei, a couple who perform together with a variety of animals including two lynxes and a parrot; Marina is the boss in all respects, and is a bad-tempered, unreasonable individual, frequently ranting and waving her stick at human and creature alike.

Then comes the clown Valeri, ill-advisedly describing his new clowning partner as “hot, she’s got curves”, and speaking lasciviously of the pictures he has of her to the woman filming him. He’s unhealthily besotted with Yana, who has returned to Russia having spent time in Europe and is the only one of the four who seems well-adjusted. Her initial excitement at the gig gives way to confusion and frustration as the senior partner, who also happens to be a racist, tramples over professional boundaries.

It is all grimly fascinating, at once comic and awful. Though there’s amusement when Alexei loses a lynx, for example, we soon realise that the animal’s 24 hours on the run around town has probably been the happiest day of its life in captivity; the sight of the scrawny creature returned to its tiny plastic cage, in evident distress, makes the blood boil.

When Marina finally throws Alexei out of their trailer, we hear the off-camera victim bemoan the loss of his supposedly beloved animals. “The bear, the ferrets…” Viewers might prefer to see more of these animals, alongside a few more of the people keeping this sorry outfit on the road, rather than spend any more time with the four people at the centre of Slyusarenko’s film .