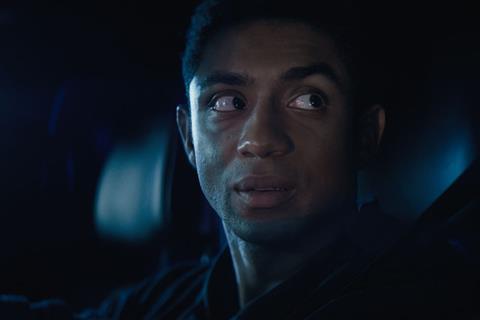 ‘The Obituary Of Tunde Johnson’

The debit feature of long-time sitcoms director Ali LeRoi, The Obituary of Tunde Johnson is a gimmick in search of a movie. Admitted, it has a strong subject in the lethal targeting of young black men by trigger-happy police. But rather than including people with their politics, the filmmakers depend on flashy sleight-of-hand, distracting us with a deceptive narrative trick that isn’t nearly as fresh as they think. After its Toronto premiere, this warmed-over drama seems likely to find only limited arthouse success, and that strictly among particularly forgiving audiences.

LeRoi ambitiously fills the film with sounds and images, but none of it adds anything to the story’s simple message

Tthe story revolves around Tunde (Steven Silver), an intense, intelligent and extremely wealthy African-American student living in upper-crust Los Angeles. Leaving his home one night to meet his boyfriend, he’s pulled over by two proudly hostile white cops, who order him to get out of his car. Tragically predictable shouts of “He’s got a gun!” – and a rush to lethal force — follow. Suddenly, Tunde is dead.

Except he’s not, as he immediately awakes in his own bed from what seems to have been a horrible nightmare. Still shaken, Tunde goes on with his life. But while this replay of the previous day is slightly changed, the ending is the same – Tunde lying lifeless in the street, shot by law enforcement. Until he wakes up, again, and the days begins once more.

The screenplay marks writer Stanley Kulu’s feature-film debut, and he may feel he’s made a startling choice with this Mobius-strip timeline. Yet, after appropriating the device, he doesn’t take advantage of it. Groundhog Day employed the idea of a life re-lived not only for smart comedy, but a subtle exploration of karma. Happy Death Day used it to construct a Rubik’s cube of a thriller, in which every choice led to new disasters. And in both films, as the main characters learned not to make the same mistakes, they also learned something about themselves. They changed. Tunde never does.

Silver gives an impassioned performance as the high-school senior, but the film’s single-minded devotion to its message removes every other conflict from Tunde’s life. He’s a black man in America; but he comes from a fabulously wealthy family of Nigerian ex-pats who give him every luxury and advantage. He’s a gay teen; but when he finally comes out to his parents, liberal intellectuals both, they react with immediate and unconditional acceptance, even joy. Tunde’s not a full, flawed character but a symbol, a simple bull’s-eye, just another statistic of blue-on-black violence. The film can’t see him as a complicated human being any more than the police can.

There is a subplot, with Tunde caught in a high-school love triangle; his beautiful blonde bestie Marley (Nicola Peltz) is lustily pursuing, and occasionally catching, Tunde’s model-perfect, deeply closeted bi boyfriend. But nothing is quite as uncomfortable as their scenes together, with the actors broadly indicating every emotion. Particularly jarring is young Peltz, made up like a Barbie doll and apparently directed to treat this as an audition for a rebooted Mean Girls. It’s not just crude, it’s confusing; if Marley is such an utterly shallow and self-centered snob, then why do Tunde’s parents adore her? Why have she and Tunde been friends forever?

LeRoi ambitiously fills the film with sounds and images – a score that veers from somnolent ambient noodlings to aggressively hostile rap; cinematic devices that range from jump cuts to fast flashbacks; dreamy closeups to grainy dash-cam footage. But none of it adds anything to the story’s simple message, or Tunde’s simplistic purpose. He’s not here to learn, or grow, or even fight back. He’s simply here, waking up each day to be victimized all over again. And if that seems to be the film’s reason for being, it fails to give us much of a reason for watching.